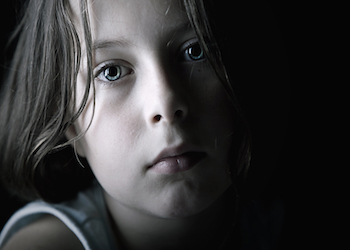 I’ll never forget that last phone call from the school principal. In the background, I could hear Michael roaring that he wanted to die, and my stomach knotted in fear, even though I knew that his school was already on lockdown and that the teachers and aides were trained in how to manage his behavioral symptoms. Those rages, those threats of suicide, were becoming more frequent. For ten years, I’d tried to get help for my son’s mental illness. We had endured a slew of diagnoses—everything from autism to ADHD—and more prescription medications than I could count. Nothing worked.

When he was calm, Michael was a sweet, kind, sensitive child with a wry sense of humor who loved Harry Potter and kept an extensive collection of stuffed animals. He had struggled with sensory issues for as long as I could remember; the sound of the vacuum cleaner would send him into fits, and he would only wear clothes without tags that had a soft, “fuzzy” texture. Though his IQ tested off the charts, he could barely write his name because of a learning disability called dysgraphia. Like many children on an Individualized Education Plan (IEP) for serious emotional disturbance (SED—you get used to the acronyms after a while), Michael was in a pull-out school, segregated from “normal” children. This practice is currently under investigation by the Department of Justice in Georgia for violating the Americans with Disabilities Act.

The day of the last phone call, Michael’s principal told me, “I had to call the police because his behavior is out of control. But please, get here first! He’s a great kid, and I’m sure this is just a medication issue or something.” I raced to Michael’s school to find him huddled under a table, rocking back and forth and sobbing.

“I can’t do it, Mom! I just can’t do it!” he cried. “I tried to be good, but I’m just a bad kid. I’m a bad kid and I want to die.” Those tragic words, which I’d heard many times, starting when Michael was just four, never get any easier.

We agreed that he should go to the acute care hospital—this was the first time he went willingly. I checked him in and promised to return with his favorite fuzzy blanket and some books. “We’ll get this figured out,” I told him. I didn’t believe it, though.

Here is what I wish parents of neurotypical children knew about my son who has mental illness:

1. My son is not a bad kid, and I am not a bad parent. When you see Michael having a meltdown in the grocery store, it’s because my son has behavioral symptoms of a brain disorder.

2. Mental health is important to everyone. But people like my son who have mental illness have to struggle so much harder to achieve mental health. Instead of celebrating them for their courage like we celebrate cancer survivors, we stigmatize people with mental illness.

3. Children who have mental illness are more likely to be bullied and to be the victims of violence. They are also much more likely to end up in jail: 70-100% of adolescents in detention have a diagnosable mental disorder.

4. When my child is sick, there is no place he can go to get long term care. This is a common misconception I hear from parents of neurotypical kids. “Can’t you just send him to the mental hospital?” they ask. The truth is that psychiatric residential care is very difficult to find because there are so few beds available. Even if I could get approved for care, I would have to send my son out of state, and I would likely have to pay the costs of care myself; average costs are about $100,000 per year. I have several friends whose children’s illness has bankrupted them.

5. With treatment, my son can probably have a healthy, happy, productive life in the community.

I described the phone call from the principal as the last one because it was. While in the hospital in May 2013, Michael was finally diagnosed with bipolar disorder, type 1. He started taking lithium, and since that time, he has not made any threats of harm to himself or others. He is back in a mainstream school taking accelerated classes, and he just finished writing his third novel featuring demigods whose mental illnesses give them super powers. That’s what I want people to know about my child, and the 1 in 5 children in the United States who have a seriously debilitating mental disorder.

With treatment, support, and love, our kids can have the happy, productive lives they deserve.

The author of this article is Liza Long and was originally published at MariaShriver.com.

END_OF_DOCUMENT_TOKEN_TO_BE_REPLACED

2 thoughts on “5 Facts About Children with Mental Illness”