Home / Editorial Monthly Focus / A Story of Dying with Dignity 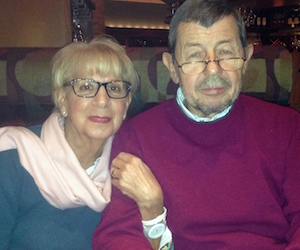 I write this story sitting on a train traveling through Switzerland while reflecting on my experiences of the past week. By writing this, I have two wishes. I wish to honor this special man by sharing his story, but I also wish to broaden people’s thinking and understanding. Dying with dignity can have many definitions and only the person who is dying can truly make that determination.

On June 5th, 2015 I learned that my cousin’s husband had a Pet Scan that showed he had aggressive bone cancer as well as tumors in his brain. Immediately I felt a sense of doom knowing that there was no way he was going to be cured, the cancer had advanced too far.

My cousin lives in Switzerland. To my knowledge there was no discussion about whether her husband wanted treatment; he was immediately blasted with chemotherapy and radiation. I could not stop myself from thinking, “why make this man suffer, was this his choice”? “If the cancer is so widespread, why not  spend his last days in peace, instead of feeling sick from treatment?”

The alternative was an aggressive and difficult treatment that might prolong life but that trade off would probably make him feel worse off and drained of energy”. I thought, “why not die with dignity”?

I now know that he chose treatment and it continued for 3 weeks and at the end of 3 weeks they sent him home. Again, was this his choice or did the healthcare system decide to send home a dying man. During those weeks he tried to fight but he was getting weaker and weaker everyday. After 3 weeks at home, he returned to the hospital, and on August 4th, entered into hospice.

When he was first diagnosed, I let my cousin know, that I could be there in a day if she needed and I needed to know that she would reach out to me when that day came. Just prior to him being moved into hospice, I received that call. But it wasn’t my cousin who requested I come, it was her dying husband. He asked that I come to talk with him before he died. I immediately started making the necessary plans and cleared my schedule so that I could get to Switzerland as quickly as possible. I wondered what did he want to discuss with me? My cousin told me that I didn’t need to get to Switzerland the next day, but very soon.

August 13th at 10am, I touched down in Zurich airport. My cousin told me that her husband was conscious and thinking clear as a bell. Our plan was to go see him the next morning. That evening I made sure I spoke with him by phone to let him know I was coming and to ask if he wanted me to bring him something. We joked around as we normally did and in the end he said “just come”.

The next morning, on our way to hospice, we received a call from a  hospice nurse telling us he had taken a major turn for the worse and that we should get there as soon as possible. Upon entering his room it was clear that he was unresponsive and had labored breathing.

I spoke out loud and told him I was there, that I had made it. He tried to open his eyes but just couldn’t, but I knew that he could hear what we were saying. Within 30 minutes of arriving, his immediate family arrived. This dying man had orchestrated that everyone close to him be at his side on that day and at that hour without his wife or anyone knowing his plan.

We sat vigil and we all told him wonderful stories of times we had shared together with him. We laughed and cried and at times it was clear he was trying to smile with us. By late afternoon there were no more expressions from him. At the end of the day, only his wife remained by his side.

I called her at 10:30pm that evening and she told me that there was no change and that he seemed calm. Within minutes of our call ending, my cousin called me with the news of her husband’s passing.

I sat in disbelief, it was as if he waited to know that everyone had traveled home safely from hospice and with his wife at his side, he took his last breath. I can’t help but think about it, that this proud and dignified man planned everything. He asked for me to come not because he needed to see me, he asked me to come so that my cousin wouldn’t be alone when he passed. He planned for his entire family to be together for his final farewell.

August 17th would have been their 29th wedding anniversary. He didn’t want her to be alone. I was there, we went to one of his favorite places and toasted him and his life.

As days passed, I came to realize that he had organized some things for her during those few final weeks he was home. He left lists and did the best he could to help her after he left this earth.

What initially seemed illogical and inhumane, now seemed perfectly reasonable and clear. It was important for him to have treatment even if he knew it would only prolong his life for a few weeks because he had things to do and things to take care of.

This was a man who truly died with dignity. In his death he taught us all lessons of love. He was a beautiful man in mind, body and spirit. He lived that way and died that way. I don’t think you could ask for anything more.

Today on September 17th, 2015 his ashes are being laid to rest. On this day I wish him eternal peace, love & happiness and thank him not only for so many wonderful moments we shared during his life, but also for the lessons he taught me in his death.

The picture that accompanies this blog was taken in December 2014, when he and my cousin last visited me in the States. I could have never imagined then that he would be gone so soon or that I would never have the pleasure of being in his company again.

Rest in peace Ernst Dettwiler, you will forever be missed and the lessons you taught me will forever live on.

END_OF_DOCUMENT_TOKEN_TO_BE_REPLACED

2 thoughts on “A Story of Dying with Dignity”