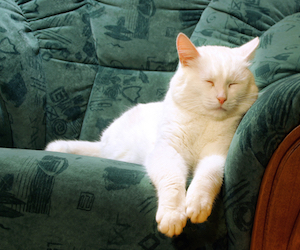 An incredibly sweet albeit misguided gesture

I speak at community groups often to help advance Alzheimer’s awareness. The audience’s contributions are welcomed, sharing their heartbreak and heartfelt experiences. And they have a lot to say.

I found this true story charming.

One of the attendees, Carol, works at the local humane society. About two weeks earlier, a gentleman named Jacob came into the shelter wanting to see the kitties. Carol offered to help and escorted him to the felines.

“Is there anything specific your looking for in a cat? Male? Female? A kitten or older pet?”

Puzzled Carol asked: “Someone you know lost a white cat?”

“Well not exactly. My wife Margaret is in an assisted living center. There are a few people there with memory problems, but she tells me that there’s one lady in particular, Helen, who has been talking a lot lately about her missing white cat. As far as we can tell, she didn’t actually have a white cat living at the center though. I guess I thought maybe she’d feel better if I could find a white cat like the one she describes and ‘return’ it to her.”

Carol smiled. How incredibly sweet, if slightly misguided. She questioned the wisdom of getting a kitty for this lady, but Carol was so touched by his thoughtfulness, she was overwhelmed.

Fortunately the humane society did not have a white cat similar in size or age to the one the gentleman described.

Validating Jacob’s incredible thoughtfulness, Carol gently suggested that if Helen didn’t actually have a real missing cat, perhaps he might reconsider actually getting her one. After all, Carol explained, there are many responsibilities to pet ownership and perhaps the assisted living center has a no pet policy anyway. Jacob nodded in understanding agreement.

And then Carol had a great idea!

And then Carol had a great idea! She set the wheels in motion to execute masterful solution. It didn’t take long.

After a few days, Carol contacted Jacob and made arrangements to meet him and Margaret at the assisted living home and together they would visit Helen.

Jacob introduced Carol to his wife Margaret. Interestingly Margaret offered that some staff did indeed remember Helen having a white cat, but it did not live at the center. A friend had brought the kitty in often at first and then the visits stopped. They assumed the cat had died.

Helen was a petite, smiley older lady. They found her in the lounge area seated in an overstuffed chair that dwarfed her small size. Slowly they each introduced themselves to Helen, doubting she’d remember their names. Then Carol took point and gently asked Helen about her cat.

Helen’s eyes widened. “She’s a pretty white cat. Soft, but I haven’t seen her in a while.” Carol noticed that Helen was imitating the petting motion with her hands.

Then Carol introduced her great idea and brought out a stuffed, white cat curled up in the sleeping position and said a silent prayer it would work.

“My cat!” Helen squealed as her thin, frail, slightly shaky hands reached out to take the feline from Carol. “Ohhh.” A slight tear formed in the corner of her eye. “You found her.”

Helen closed her eyes and hugged the cat tight. Carol smiled inside and out. They stayed a little longer with Helen and then said goodbye, Helen still smiling.

“Carol, what made you think of a stuffed cat and how did you know it would make Helen so happy?” Jacob eventually asked.

“My aunt had dementia. I remember seeing her with a stuffed animal, a bunny I think it was. It seemed to be comforting to her. Getting a real cat for Helen wasn’t going to work, but a stuffed kitty might. I just hoped for the best.”

Paraphrased with names changed but with permission form “Carol”