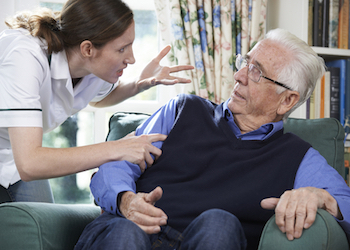 2017 was a remarkable year in numerous ways. So many things happened this past year that will forever alter our lives, some good, some bad. In the area of sexual harassment and abuse, there were unprecedented numbers of revelations of misconduct in virtually every part of the public realm.

Time Magazine’s 2017 Person of the Year was not one person, but the many brave women (and some men) who had the courage to come forward and speak up about the harassment and abuse they suffered. They were called the “silence breakers”. Virtually overnight, the seemingly untouchable careers of Hollywood producers and actors, well-known TV personalities, politicians, and many others came to a crashing halt in the wake of credible allegations made by these courageous folks.

What happened in 2017 with regard to sexual harassment and abuse allegations was great, and I expect that it will continue. However, there is one area of our society where we need to encourage more “silence breakers”, and that is among our senior population. Most people would rather not know or think about this, but the fact is that the elderly in our society suffer widespread abuse, and thus far, very little has been done about it.

The Rampant Spread of Nursing Home Abuse
America’s population is aging rapidly. Each day, 10,000 Americans turn 65 years of age, and with the Baby Boomer generation only about half a decade into retirement, this trend will continue for at least the next couple decades. So what do our aging demographics have to do with nursing home abuse?

As the population ages, nursing home populations skyrocket as well. At the same time, there has been a lot of consolidation in the industry, with many nursing facilities that were once non-profit being acquired by “for-profit” entities. With a growing number of facilities now more concerned about their bottom line than they are about their residents, there have been staffing shortages and more relaxed vetting standards for new hires.

The result: according to an ABC News report from a couple years ago, the elderly are abused in one out of every three nursing homes throughout the country. This abuse can take many forms, from neglect to physical abuse to grotesque sexual abuse. The report found that in many of these cases, the abuse violations caused serious harm to the patients.

Sexual Abuse in Nursing Homes
Ask any nursing facility administrator how their staff handles sexual activity in their facility, and 99% of the time, you will get a stunned look along with something along the lines of “that…doesn’t happen.” But rest assured, it does. In fact, it happens far more often than anyone on the outside realizes.

Some of this is consensual intimate relations that happen between residents (yes, that does occur too), but much of the time, it is harassment or abuse. The perpetrators are not always nursing home staff, either; abuse occurs among residents as well. Ultimately, however, it is the responsibility of staff to ensure that this type of abuse does not occur, and when there are staffing shortages, they are not always able to properly monitor activity between residents.

What makes sexual abuse in nursing homes particularly egregious is that it is happening to our honored elders; those who are among the most vulnerable in our society, and who are often unable to speak for themselves and/or do not have anyone to speak up for them when this type of situation occurs. Many seniors do not report abuse because of fear of reprisal and/or fear that no one will believe them; and if other family members are not checking up on them regularly, their situation begins to feel hopeless.

Abuse of Alzheimer’s and Dementia Patients
One of the primary targets of perpetrators of sexual abuse in nursing homes are residents who have Alzheimer’s or dementia. These residents are particularly vulnerable because they are often confused and unable to recall what happened to them. This makes it far less likely that an incident of abuse will ever come to light unless the perpetrator is caught in the act.

How You Can Be a “Silence Breaker”
Just as not everyone who is accused of sexual harassment or abuse is automatically guilty, I do not mean to imply that every nursing facility allows this to happen. There are many great facilities out there that provide outstanding care for their residents. That said, if you have an aging loved one in a nursing facility, you should at least be aware of the possibility that this might be occurring.

In 2018, make it one of your resolutions (hopefully the one you will actually keep) to visit your aging loved one more often than you have in the past. When you are there, look for signs and symptoms of abuse; such as depression, emotional withdrawal, sudden mood shifts, loss of appetite, etc.

If something does not seem right, ask pointed questions of your loved one and the facility administrator. It is best to be on the safe side and make sure your loved one is okay, even if you have to step on a few toes and rub a few people the wrong way to make sure that happens.