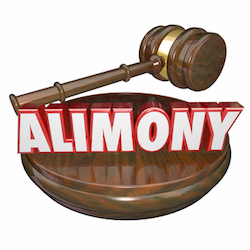 Alimony is a part of many divorces.  As New Jersey recently passed legislation limiting the duration of alimony payments, I got curious as to what was done in other states.  And so began my research….  This is the second part of this series.

What states have limits on the duration or amount of alimony?

Alabama – spousal support may not be available if the marriage lasted less than 10 years.

California – support generally terminates at retirement.  In marriages of less than ten years, the term is limited to half the length of the marriage.

Indiana – alimony is limited to three years, unless the recipient is ill or disabled.

Kansas – the Court cannot award maintenance for more than 121 months with some exceptions.  Many counties have guideline formulas for amount and duration

Maine – rebuttable presumptions are that in marriages or civil union of between 10 and 20 years, alimony is limited to a period equal to half the length of the marriage.  Normally, alimony is not awarded in marriages of less than 10 years.

New Jersey – In a marriage or civil union of less than 20 years, the alimony term cannot exceed the length of marriage/civil union unless there are exceptional circumstances.

New Mexico – There are alimony guidelines for both couples with children and without.    Alimony is usually not granted in marriages under 5 years.  In marriages between 5 and 10 years, alimony may be granted using a reimbursement theory or rehabilitative support plan.  Additional factors in play for marriages between 10 and 20 years, and those over 20 years.  The formulas are as follows:

New York – 20 factors are considered in the determination of maintenance (not called alimony).  While maintenance during the divorce is discretionary, temporary maintenance is determined based on state guidelines on the first $500,000.00 of income.  This formula is used unless the court determines the award to be unjust or inappropriate.

Ohio –  the state is considering the following formula to limit the amount and duration of alimony:

Texas – other than in the case of physical or mental illness, alimony is limited in duration as shown in the following table. The amount of alimony is limited to the lessor of $5,000 or 20% of the spouse’s average monthly gross income (which is defined in the state’s statutes).

Utah – alimony may not be ordered for a duration longer than the number of years that the marriage existed unless there are extenuating circumstances.

Washington State – There are no set formulas or guidelines. Research indicates that an informal guideline for marriages under 25 years is for every three years of marriage, a spouse will receive one year of maintenance. For example, if a marriage lasted 15 years, alimony payments would last for five years and a 10 year marriage would result in alimony for three years. Permanent alimony may be granted in marriages over 25 years.

View Part 1 of this series

Note: This article is provided for informational purposes only and does not constitute legal advice. The information is intended, but not promised or guaranteed to be current, complete, or up-to-date and should in no way be taken as an indication of future results. The information offered only for general informational and educational purposes. They are not offered as and do not constitute legal advice or legal opinions. You should not act or rely on any information contained herein without first seeking the advice of an attorney.