Home / Editorial Monthly Focus / Around The Table of Diversity, Acceptance and Love 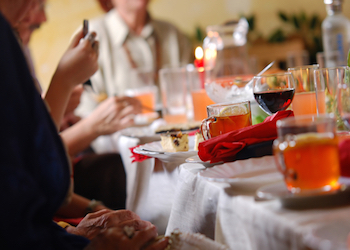 We are just done with THE American holiday, Thanksgiving. Common to all aspects of beliefs and practices, it remains so “American”. This year, as a break from “tradition”, we gathered as an extended family at my daughter’s. Two dozen or so people, representing several generations, states of residence and even political beliefs; although I was under orders from my daughter not to discuss the election.

Despite the fact that many of those around the table do not see each other for a year or more, that tie of blood and marriages did have us blend together. Over appetizers and way too much food and wine, we all left with a sense of fulfillment. There were as many stories around that table as there were people and I imagine that the same held true for your get together’s.

The challenges of family dynamics in our age is, to say the least, interesting. These next few weeks will focus a lot on family dynamics and, if you can observe them, how so much has changed. Look at the faces around the table in so many homes in this next month. The changes in so many families is very noticable. Older barriers have fallen and at “home” there is so much more diversity. We may have political views on the changes in diversity in society in general, but, when it comes to our own sons and daughters, sisters and brothers, moms and dads; well, that is different!

The power of family may never have been more important than it is now. Pundits may decry the disappearance of the “traditional” family (whatever that means!). Despite what many say, the power of family remains; it just may look and feel different. Mobility, technology, diversity may have all combined to alter the landscape; but let me suggest that, in the end, our family remains the foundation for education, values and beliefs. It is the base against which we rebel as kids and the foundation to which we, more often than not, return as we mature. And what is so often true in our redefinition of family, for an increasing number of people, that “family” is that close friendship network that accepts us and loves us and fills that gap for people who are alone and for whom that biological family does not apply.

So as we gather together for celebrations and various holidays, take a moment to step back and celebrate that family that you have; be it biological or friendship in its orientation. In the world which increasingly lacks logic, that circle of acceptance and love remains, perhaps, the last vestige of truth.
Shalom,