Home / Divorce / Attending to Your Children’s Feelings During Divorce 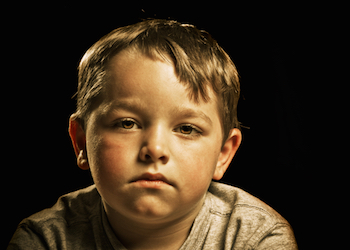 “My Life Is Falling Apart…”

Justin threw his backpack into the car, and settled into the front seat in a subdued heap.  I was picking him up from his friend’s house just before the dinner hour.  His downcast mood was uncharacteristic after an afternoon of X-Box and Goldfish with his best buddy.
Before backing out of the driveway, I paused, looking curiously at this tough, yet tender 12 year-old of mine.  He had a will of steel, but always wore his heart on his sleeve.
“Justin…you look like you are going to cry…” I offered, noticing his squinted eyes and slight quiver in his chin.  I knew my verbal observation would give way for whatever needed to surface.
Huge tears began rolling down his cheeks, falling from his chin, and dripping onto his jeans.  His shoulders started to shake with intense emotion.  He sobbed, with occasional pauses to catch his breath.  I just waited, knowing this needed to happen and that there was more to come.
After a couple moments, he looked up at me as the pouring rain tapped loudly on the car windows, mimicking his teardrops.  “Mom…  First, Duster died, then Luke left, and now you and Dad are getting a divorce…  My life is falling apart…”
These words will stay implanted in my head forever.  They were immensely heavy with despair and incredibly raw in their truthfulness.  I could do nothing but honor them in silence for a moment, and then acknowledge his reality.  “You are so right, Justin.  I’m so sorry…”  My reply didn’t feel like enough, but I knew he was not seeking to be fixed or explained to, but only to be heard.
At that point in time, Justin had witnessed his 14 year-old yellow lab be put to sleep on the vet’s floor before his very eyes, seen his older brother go half way across the country to boarding school, and watched his parents separate.  It occurred to me how utterly lonely and abandoned he felt.  I swear I felt my heart crack on the outside cement.
Yet, ironically, uttering these simple words in their bare form was probably the most profound act of bravery my sixth grader had ever risked in his life.  I was heart-broken, stunned, and proud at the same time.  Strangely, I knew that if he could give voice to such sharp pain, that he was well on his way in the grieving process.  He was making his way through grief, not trying to go around it.
The best advice I was ever given with regards to helping my children through my divorce process was to give them permission to own and express their feelings, whatever they are.  I heeded those wise words in that moment, and it has paid off big time.  I am forever thankful to Child-Centered Divorce Mentor, Rosalind Sedacca, for this invaluable counsel.
When we go through divorce, we take away the very precious foundation our children were born into, even if it has gone awry.  Given this fact, we need to give them control of something, anything – especially the right to own and express their feelings.  In doing so, they come to realize that their emotions are not to be hidden, avoided or shunned, but felt, validated and held.   This is the path to healing and resilience.

Marie W. TenBrook is a Certified Divorce Coach who helps divorcees make best decisions that honor themselves and respect the well-being of all involved, empowering them to come out on the other side healthier, happier, at peace, and eager to embrace what's ahead. She is also published author and blogger, inspirational speaker, and divorcee and mother of two who is passionate about accompanying others from lives of trauma to transformation.