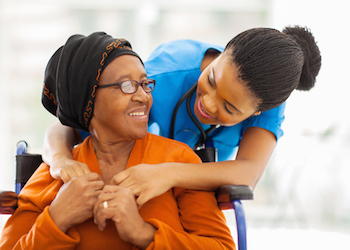 “Don’t take it so personally.” or “It’s not personal.”

If you’ve ever parented a teenager, you’ve probably heard it more times than you can count and maybe even said it reassuringly to yourself. I know I did.

Your cherub of a child grows into a rebellious and rude teenager. They hurl non-verbal daggers in the form of eye rolls and stomped feet. They are outwardly sassy or conversely won’t talk to you if your hair was on fire. All through this long phase you’re supposed to remember it’s not personal!

I’ve also had to remind myself over and over that my mother’s nasty remarks to me “weren’t personal” either as her dementia advanced.

Almost all people who journey through dementia/Alzheimer’s experience adverse personality changes: increased frustration, accusatory remarks, bewilderment, etc. And most likely you as the dutiful son or daughter, are the recipients of their declining demeanor.

“Take me back home now!” My confused and irritated mother demanded of me often after she needed to be relocated into a secure facility. This was after several delusional episodes in which she thought she lived back in the house I grew up in.

“Where are you going? Don’t leave me here!” Mom also yelled when I took her back after being at my house for Christmas Day.

“You never come to see me!” upon my second visit of the day.

The idea that you haven’t done enough or aren’t doing the right things in behalf of your parent plays havoc with your emotions. While you’re in the thick of making difficult decisions and then living the fall-out, snippy judgmental remarks from Mom or Dad that appear to challenge your integrity, are painful. I know; I’ve been there and many friends of mine have as well.

Caring for someone else regardless of the situation is a very personal undertaking. Whether it’s a newborn or an adult, it’s emotional, physical and yes personal. In both age extremes, someone is dependent on you to make good decisions to keep them safe and comfortable.

The infant cries to communicate any need. But your adult parent uses words, sometimes harsh to convey theirs. However, their primary needs aren’t physical per se but emotional insecurity. And therein lies the problem. Stressors such as relocation as well as the neurological decline that accompanies dementia/Alzheimer’s trigger anxieties manifested in negative behaviors and accusatory remarks.

My advice to especially family caregivers: Any decision made out of love in behalf of someone regardless of the consequences, is the right decision at the time. It may have to be revisited, tweaked, or outright gutted, but it isn’t wrong.

Your parent snipping at you for not visiting, not taking them ‘home’, leaving etc. is personal! But these words aren’t coming from the loving parent you knew who raised you. They’re coming from a stranger compromised by a disease over which they and you have no control.

Take some solace in that fact. It’s the dementia talking for them, so to speak, as their words are manifestations of their fears and insecurities.