Home / Editorial Monthly Focus / What Changes Will Fall Bring for You? 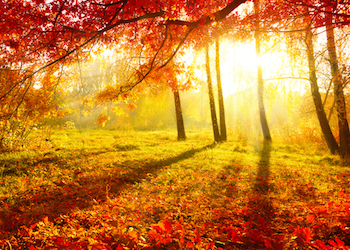 “He who binds to himself a Joy, Does the winged life destroy; He who kisses the Joy as  it flies, Lives in Eternity’s sunrise.” William Blake

It’s almost September and a new school year is always a marker of change for me, even though I haven’t been a student for a long time. And in my life I have often hated change. Once an imperious supervisor said to me, “Well you can’t be a good therapist if you don’t like change.” I didn’t say then, but seriously beg to differ now! Change is hard and good therapy is about a lot of things but in my book the ability to empathize is always one of them.

Of course, ideally we get to the zen of ‘now’ and relish each and every moment as if it were our last, but in the meantime, change always implies grief to me. Not necessarily the soul crushing devastation of losing a loved one. But as the Buddhists would say each change is a ‘little death’.

“What is our life but this dance of transient forms? Isn’t everything always changing: the leaves on the trees in the park, the light in your room as you read this, the seasons, the weather, the time of day, the people passing you in the street? The Tibetan Book of Living and Dying, Chapter 2, Sogyal Rinpoche.
When I was younger it was easy to deny this, even though, ironically, I changed the most in my first twenty years. But when I was 29, my mother was diagnosed with cancer and everything changed fundamentally, especially my hope that the most important things in my life would stay the same.

I remember the day that I knew this: It was a Thursday morning. I was sitting in my office between clients, and something tugged at me. I had spoken to my mother that Tuesday evening and she asked me to come and visit. I said I would that Saturday. Her voice sounded shaky, but more than that, her words got mixed up. Her words had been many things before, harsh, cold, loving, nervous, warm, but never mixed up. She’d been given six to eighteen months to live and we were in our fifth month. I was also about five months pregnant and still hopeful she’d be around to meet her first grandchild. But something felt wrong.

I told my supervisor my mother needed me and drove to her. When I walked in the house it was eerily quiet. My grandmother had been staying with her but wasn’t there. I walked up to my mother’s room and she was laying there, possibly dead, at least she looked so, almost hollow with callow skin that looked faintly bruised. I drew a sharp breath inward and she stirred. She woke and wondered what I was doing there. She came down and made me a cup of tea. She tried to make things seem normal, but I knew then…

…“When we finally know we are dying, and all other sentient beings are dying with us, we start to have a burning, almost heartbreaking sense of the fragility and preciousness of each moment and each being, and from this can grow a deep, clear, limitless compassion for all beings.” RInpoche

I called her doctor and he said it was time for Hospice to come. They came and thought she’d have a few more weeks with us, but it was only a few more days. I called any and all family that might want to see her. Her brothers came. My father came. My brother and sister came. We spent one last amazing weekend together.
I often wonder how I knew something my grandmother and her Doctor didn’t seem to know. I had no experience of death and dying before this. None at all. But I knew and have known ever since. I envy people who have not lost anyone tragically young. At the same time, I am grateful that I have been pushed to understand the process of living and dying again and again since then.

And that learning seems to be paying off a bit. I am less anxious than I was awaiting the next phone call, the next sixth sense that something is definitely wrong. I am more hopeful that some things might actually go right. I took a risk and had a perfectly healthy baby at 41 even though my own mother didn’t live past 51. What if I didn’t either? But at almost 52, I am still here! I am becoming more able to be in the moment, knowing a new loss will come, but not ever as caught off guard as I was, and yet not in feverish anticipation either.

Is this what Elizabeth Kubler Ross meant by the final stage of grief: acceptance? I have often wondered what she did mean. On the face of it, ‘acceptance’ seems like a pretty weak pay off for all that grief work! No wonder addiction is often so much more attractive. At least there is a “high” involved!
Here, however, is a definition of acceptance I like:
‘Acceptance in human psychology is a person’s assent to the reality of a situation, recognizing a process or condition (often a negative or uncomfortable situation) without attempting to change it or protest. The concept is close in meaning to ‘acquiescence’, derived from the Latin ‘acquiēscere’ (to find rest in).’
Even the phrase, “to find rest in” helps me breathe out long and slowly and breathe in a moment of peace. Like a sigh. Ahhhhhhh.

It brings to mind one of my favorite biblical lines: “Come to me all ye who are weary and heavy laden and I will give you rest”. Matt 11:28 29

Now that’s a kind of loving acceptance I could get behind. It speaks not only of accepting the reality of change for what it is, but also of some empathy and compassion for how hard it can be.

So, whether you are starting college this Fall, saying, “Farewell” to a child who is going to college, starting a new career, having your first baby, retiring, moving, starting 9th grade, facing a serious illness, losing or just having lost a loved one, or simply wondering what changes the Fall might bring for you, remember the idea of someone lovingly saying to you, “Yes it’s hard and yet you will find rest, a deep feeling of resting in the knowledge that you are loved. And at least that is eternal.”