Home / Editorial Monthly Focus / My Dad, “The Can Man”, a Lesson in Giving 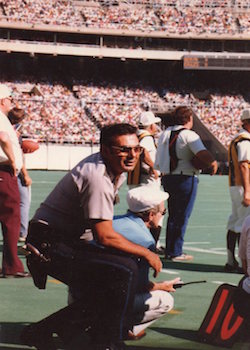 This was a nickname I had for my Dad. He was born in 1930 during the Great Depression. Although I know he never went hungry, I’m sure the struggles of those times made an impression on him as he witnessed food scarcity for people he knew who were maybe a bit malnourished and hungry. He grew up during the WW II era of Victory Gardens, and then went off to serve his country a few years later during the Korean War. I guess that is when he became “enamored” of canned food (Army Rations). How that could be when he was surrounded by a family of good cooks who used many fresh ingredients, I’ll never understand, but food from a can made his day.

Fast forward to the years he lived with me due to health issues. After open heart surgery for a ruptured mitral valve, and post-operative complications of kidney failure, he became a 3x a week dialysis patient. On his way home from dialysis he would pass a Shop Rite and pretty much every time, 3x a week, he would shop for food. And you guessed it- most of it was canned goods. Oh there would be an occasional bottle of something, and even some fresh produce here and there, but always, always cans.

When I would get home from work, on his dialysis days, I knew what I would find. Bags and bags on the counter top in the kitchen with canned goods.  The stockpile was growing. I’d insert a can or two of something in our meals, but certainly not often enough to downsize the bounty.

I had a pantry in the kitchen, floor to ceiling shelves, and each and every one was filled with cans of this and that. I had to put some tables in the garage to hold the overflow. And still, more cans would show up 3 days a week.

One night, I was in bed reading a book and I heard him yelling from his room.  “Hurry come quick, hurry up”.  I wrongly assumed it was a health crisis. I flew out of bed, ran down the hall, and there on the TV was a commercial from Shop Rite for a “can can sale”.  He was ecstatic.  I started to sweat a bit. I knew what was coming.  Yes, more cans.  That day of the “can can sale” I entered the kitchen to not only bags on the counter top in the usual place, but bags of cans on a separate counter area, and then the entire kitchen table laden with bags and bags of , you guessed it, canned goods.  I still feel the phantom pain in my tongue that I bit, not to literally freak out.

So, I composed myself, and figured I may as well get to work.  I took every can out of the pantry. Lined everything up and literally filled the shelves once more with all the canned goods, but put them in alphabetical order. For not only did he not know all that we had (he never put things away, only shopped for them), I had no idea of all there was.  Once the pantry was locked and loaded, I went to the extension in the garage and lined up the overflow in alphabetical order.  I made it a point to tell him, as gently as I could manage, that we didn’t need any more cans of anything for a while.  Nada, zip, never heard a word I said.

Flash forward a bit more- it was the season of food collection for the food drive. One evening, I was making dinner and the doorbell rang. He went to answer it. I heard some conversation, he came into the kitchen, opened the pantry and removed ONE can and ONE can only and went back to the door. I asked what that was about and he said it was a little boy collecting food. I asked what he “donated” and he said “a can of cream of mushroom soup” as proud as punch that he would part with one of his beloved canned goods.  Once more, I bit my tongue, as I calmly said, “Is that all you donated?  Dad, I counted the cans, we have 250 cans of food (I do not lie on that matter, yes, 250 cans!!!! We could have survived a nuclear winter almost with the stockpile). He appeared wounded that I would even suggest a larger donation of food. For you see, going back to his upbringing and his love of canned food, it was like he was giving away one of his children, that is how much food in a can meant to him.

About a week after the donation, there was a knock at my front door early one evening. I answered and there stood the little boy that collected the food. In his hands was a lidded container of lasagna. With this big smile on his sweet little face, he said “My Mom asked me to bring this to you. She said you may not have enough to eat with your Mom and Dad being sick, and with only being able to donate a can of mushroom soup”.  I don’t know how I controlled myself. I had tears in my eyes- I wanted to laugh, get angry and embarrassed, and be overcome with this sheer act of kindness all at the same time. I thanked him, asked where he lived so I could return the container and thank his Mom.

I did find it difficult to not lose my cool on my Dad.  But then I thought, how could I ruin the joy of his supermarket hunts bringing home the metal bounty, or ever know the emotional trauma of possible food scarcity from his youth, or understand how comforting a can of Army rations in the field during a war was for him. So I made it a little joke between us and he gave me that devilish smile and that was the last time I ever said anything to “Can Man” about his cans.

I returned the container to my neighbor, told her the story of the 250 cans, thanked her for her kindness, and we both had a good laugh. But that was the time I started to think about how blessed we were with our 250 never dwindling can stockpile and how many others may be going hungry.  And that is when my little mission of bringing food to my local church pantry started.

As school starts, and if you too are blessed with a full pantry or refrigerator, think of maybe someone you or your children know who experience food scarcity. Can you make an extra lunch for your child to take to school for a classmate that may be food deprived? Is there a neighbor or friend you know that could use a bag of groceries now and again, either directly or an anonymous drop off at their door? Is there someone you know that would be appreciative of a supermarket gift card, no matter the amount, to be left in their mailbox or mailed to them from time to time anonymously? Can you offer to pay a child’s lunch fee at a school?

Although the academics of reading, writing, and ‘rithmatic (or Ugh! Core Math) are important for your children to learn, teaching them to be observant of the needs of others, to show compassion and kindness especially anonymously, is a life lesson that is worth its weight in cans.

Wishing you health, blessings to never know hunger, and living your best life.

Julia Scalise, DN, PhD is a Holistic Health Practitioner and author of the #1 Bestseller “Do One Thing Feel Better/ Live Better”. She is an expert in compassionately helping hundreds of clients eliminate underlying causes of health issues, discover ways to improve emotional well being, attain a more positive outlook on life and find their bliss. In practice over 16 years, she is a board-certified member of the American Association of Drugless Practitioners, American Association of Nutritional Consultants, American Holistic Health Association and a Physiological Regulating Medicine Practitioner. Learn more about Julia, http://www.juliascalise.com