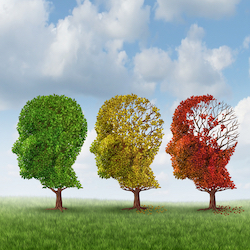 A few weeks after my father returned home from rehab, my mother ended up in a bit of a shouting match with my father. This was not typical in their 40+ years of a loving marriage.

Before my father was hospitalized about 6 weeks earlier, he was an independent and healthy 82 year-old man who was supporting my mother as her caregiver. My mother was a 5 year cancer survivor but left very frail and physically dependent after treatment.

My father had a catastrophic heart failure incident one night when he was sleeping. He awoke the next morning with a heart rate of 25 and was admitted to the hospital. Given the oxygen deprivation to his brain, he ended up with vascular dementia and never again had short-term memory. My dad would spend his remaining months of life with major confusion, behavioral outbursts, and fragile physical health.

My father’s decline was sudden and happened without warning. Although his need for support changed, he still looked like the same person. The person my mother and I knew as an intelligent, loving, organized, and strong husband and father was not the same. Yet, he looked the same.

One day when my mother got into a shouting match with my father which happened regularly over the course of several weeks, my aunt (mom’s sister) said something wise that gave pause. My aunt told my mother that my Dad looked like Irv (his name), sounded like Irv, and smelled like Irv, but he was only the Irv we knew on the surface. He no longer had a mind like Irv so it was important to understand that.

Until my aunt let my mother know that in blunt sisterly terms, I was unsuccessful in convincing my mother not to argue with my father when he did things out of the ordinary or made requests that did not make sense. My mother saw him as the same person she had been married to for over 40 years. Dementia is invisible from a physical appearance standpoint.

If my father had a brain injury, lost a limb, or showed some other outward appearance change, it would have been easier to absorb and adapt to his needs.

Many people with Alzheimer’s or other forms of dementia do not show physical changes until very late stages of the disease. In fact, dementia can linger invisibly for many months or even years before it is even detected.

If you are supporting a loved one with dementia, do not knock yourself for feeling challenged or even angry at the changes you observe. Try to be patient and share your concerns/frustrations with a trusted friend or professional so you can vent.

Most importantly, forgive yourself if you lash out at your loved one who is suffering with dementia. Outbursts associated with confusion are normal.

Once my mother was able to adjust to my father’s “new normal,” she was able to avoid shouting matches. After my aunt left, my mother told me that she felt badly for some of the things she said to my father during their arguments. I told her to forgive herself because I am certain my father didn’t even remember any of those arguments.

One of the few perks with dementia is that the person will not remember recent arguments or disagreements. Just keep moving forward and shower yourself and the person you care for with love and patience.