Home / Life Help / What Do You Deserve? 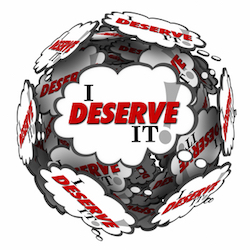 I notice that most people I know, including myself, get confused between the words “deserve” and “entitled”. I think most of us think they are synonymous. But take a second, imagine someone saying the next two sentences to you and notice your own internal response to both of them. The first person lovingly says, “You deserve to be treated so much better than that.” And the second person says kindly, but more formally, “You are entitled to be treated so much better than that”.

Doesn’t it seem like a decent lawyer might say the second one? And a loving parent might say the first? At the very least doesn’t it help show that the psychological resonance to both words is not the same?

The dictionary says that ‘to deserve’ essentially means to be worthy of something, whereas, ‘to be entitled’ means to be given the right to something.

I think it’s important to reclaim the word ‘deserve’ and distinguish it from ‘entitlement’, because I think believing in our essential worth has a lot to do with figuring out how to fulfill our own potential.

Often at the core of anxiety, depression and low self-esteem I find people have an internal conflict with the concept of deserving. It feels too passive to most people: caught somewhere between a belief that “I only deserve what I earn” and a fear of sounding entitled.

One client recently went so far as to argue that even babies don’t ‘deserve’ to be loved, and that love is only something that can be earned. I recognize that my own argument has everything to do with belief. There is no definitive argument which confirms absolutely what we do or do not deserve.

But since this is my article, let’s start with my own belief that everyone deserves an equal opportunity to be well nourished, well educated, and to pursue their natural talents. If we all deserve them, receiving them or not becomes more an accident of birth. What we do or don’t do with these gifts (or lack of them) becomes what we earn.

In our culture, there is a lot of emphasis on individualism. We believe strongly in the freedom and ability to be responsible for our own choices. This trait helps most of us become strong, hard working, “go getters”. I love this part of the American spirit, but because of this trait we don’t really want to be given anything, we want to earn it. I think we often feel conflicted by an element of good or bad fortune in our circumstances. We understandably want all life to be under our control.

But I think life is actually a mysterious combination of what we can control, and what we can’t.

To me ‘being entitled’ to something means that there are some things we are entitled to and other things we are not. I am entitled to be paid what I am owed. I am not entitled to steal. Over these things I have some control. Let’s say, deserving, on the other hand, is ubiquitous, but receiving what I deserve is not necessarily in my control. If I believe that everyone deserves to be treated well and have their opinion considered and respected, to be cared for and loved (and that this is separate from consequences and rewards for good and bad behavior), it becomes a wonderful baseline for myself as well. One that can help me begin to earn and fulfill my own potential.

Some people feel guilty about having been born with more talent, opportunity or money than someone else. Others feel guilty or regretful about real or perceived “crimes” they have committed. Still others, were raised to feel good about themselves only when they succeed, but not simply for who they are. Most of us forget to distinguish between what we believe we deserve naturally and what we believe needs to be earned. No matter who you are, what you have or don’t have, what you do or don’t do, it’s important to reflect on this distinction and form your own beliefs.

Why? Because there is a lot of research in neuroscience that words in general matter powerfully to our unconscious mind. Important words matter even more. Words can change your brain.

Sometimes you will still be treated badly because we live in a world where bad things happen, unfortunately all too often, but you will know, more and more deeply, that it’s not because you deserve anything bad to happen to you. Imagine how much better you could cope with whatever happens to you, good or bad, from this basis. And how much more you will accomplish when you believe you deserve the very best this world has to offer, just like everyone else.