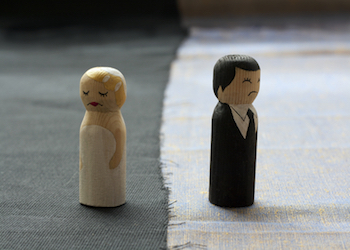 We live in a culture that prizes marriage and despises divorce. As a result, those who choose to evolve their families through the process of separation are often faced with a heavy dose of guilt and shame. In an effort to shed light on the shadows, I’ve comprised the list below to help combat some of the emotional ugliness that comes with divorce. Go ahead and hold your head high because…

Divorce doesn’t make you a “quitter”. Despite popular myth, divorce doesn’t happen on a whim. Nobody goes to Vegas and gets a drive-through divorce as a result of once-forgotten chores or a mixed-up dinner reservation. No, divorce is most often the last resort of two people who struggled, sometimes for years, to find a way to make it work. In the end, divorce is an appropriate solution, not a problem in and of itself.

Divorce doesn’t make you a bad parent. My parents separated when I was thirteen. Although I’m sure they felt the standard amount of parental guilt about the event, I continue to regard their divorce as one of the best things to happen in my life. It allowed me to see my mom and dad as human beings, and our relationships improved as a result. My home life became more peaceful, and as my parents recoupled, my family grew. Through the process I learned about successful strategies to communicate and deal with conflict. I also learned that the toughest decisions are sometimes the best for everyone.

Divorce doesn’t make your marriage a failure (and if it does, so are all other marriages). Couples make a lot of promises on their wedding day. Among them: to love, honor, respect and be faithful… till death do they part. For some reason, our society tends to disregard everything but the timeframe when judging the end of a marriage. But how many couples truly treat each other with respect at all times? How many long-term marriages go without some type of infidelity (whether it was known or not)? Personally, I prefer to examine partnerships on a different scale: did the union help you grow as a person? Did you face the world together, as a team? Did you create and raise loveable children? If you knew that it would end, would you do (at least most of it) again?

Feel free to post this list where you’ll see it on a regular basis. Divorce alone is no reason to feel ashamed.

END_OF_DOCUMENT_TOKEN_TO_BE_REPLACED

One thought on “Divorce Doesn’t Make You………”