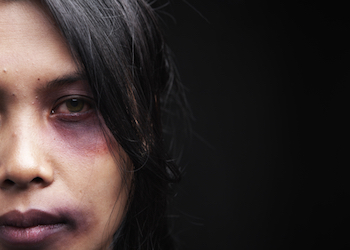 The Centers for Disease Control recently conducted a study that showed single moms are the most sleep deprived in America. Of course, my first thought was, “Did we really need a study to prove that?” It seemed like a ‘no-brainer’ to me. Other studies have also been done linking sleep disturbances and/or lack of sleep between mothers and children who are victims of domestic violence.

A study conducted by Humphreys, Lowe, & Coventry (2008), argued that the sleep disturbances in domestic violence victims are both a strategy to cope, and an effect of the violence. Makes sense, right? The strategy is to maintain a sense of hyper-vigilance, caution, and awareness of surroundings (Think Mama Bear!). And, the effect of the violence disturbs the sleep from the trauma, causing bedwetting, inability to ‘turn off’ the hyper-vigilance, and of course, nightmares.

Sadly, all too often we hear about another example of domestic violence. Another woman, another child, became a victim of physical, emotional, or sexual abuse. As Super Bowl Sunday approaches, we will start to see more ads than we have seen during the regular season, about domestic violence. No More (NoMore.org) is a wonderful organization trying to raise awareness, educate, and provide resources on the fight against domestic violence, and will be running an ad during the Super Bowl.

While national organizations like No More, and local ones like, Laurel House, and Montgomery Child Advocacy Project (MCAP) in Norristown, PA, provide great support and information, sometimes people who aren’t victims still need to know practical ways to help, or need to know what not to say or do. Here are some examples:

Be willing to come forward and testify if you are a witness. Hiding behind fear doesn’t help the victims, but instead it emboldens the abuser.

Remember that the victims of the abuse want to live ‘normal’ lives—they don’t want to live in fear, or hyper-vigilance.
Children are amazingly resilient, however need an outlet or a ‘safe place’ for their experience with abuse, too—connect them with specialty trained abuse counselors. Children need a voice for them!

Remember that the risk of abuse never goes away 100%–there’s always a chance for it to resurface. Be aware and support your loved one, as needed.

Most importantly, remember that victims of abuse are still human and very capable of loving, laughing, and enjoying life. Don’t be afraid of them. Listen, love, and support them as needed.