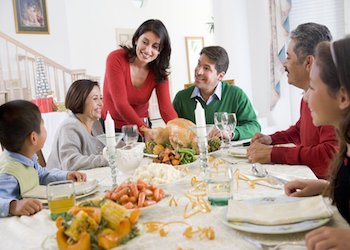 The surprise election of Donald Trump will certainly challenge family dynamics the coming holidays and beyond. As we head into the prime holiday season when families get together for perhaps an annual visit, people who disagree with the “Trumpview” of the world are still trying to process what happened and why.

Certainly, families with members who have opposing views will be challenged to maintain a civilized discourse and remember the purpose behind celebrating these holidays. It will be difficult, especially with the shock being so recent, significant, and so hurtful.

The shock was compounded for me when I discovered some family members, whom I thought were kind people, are now doing a victory dance and saying that the system has to be blown up to improve it, that people have to suffer and they need to learn to process helplessness. They clearly do not understand what they did and it is quite troubling.

I found an excerpt from an interview with San Antonio Spurs coach Gregg Popovich that exactly matches my feelings.

“Right now I’m just trying to formulate thoughts. It’s too early. I’m just sick to my stomach. Not basically because the Republicans won or anything, but the disgusting tenure and tone and all of the comments that have been xenophobic, homophobic, racist, misogynistic.

“I live in that country where half of the people ignored all of that to elect someone. That’s the scariest part of the whole thing to me. It’s got nothing to do with the environment and Obamacare, and all of the other stuff. We live in a country that ignored all of those values that we would hold our kids accountable for. They’d be grounded for years if they acted and said the things that have been said in that campaign by Donald Trump. […]

“The fact that people can just gloss that over, start talking about the transition team, and we’re all going to be kumbaya now and try to make the country good without talking about any of those things. And now we see that he’s already backing off of immigration and Obamacare and other things, so was it a big fake, which makes you feel it’s even more disgusting and cynical that somebody would use that to get the base that fired up. To get elected. And what gets lost in the process are African Americans, and Hispanics, and women, and the gay population, not to mention the eighth grade developmental stage exhibited by him when he made fun of the handicapped person. I mean, come on. That’s what a seventh grade, eighth grade bully does. And he was elected president of the United States. We would have scolded our kids. We would have had discussions until we were blue in the face trying to get them to understand these things. He is in charge of our country. That’s disgusting.”

A reporter then interrupted him.

“I’m not done,” Popovich said. “One could go on and on, we didn’t make this stuff up. He’s angry at the media because they reported what he said and how he acted. That’s ironic to me. It makes no sense. So that’s my real fear, and that’s what gives me so much pause and makes me feel so badly that the country is willing to be that intolerant and not understand the empathy that’s necessary to understand other group’s situations. I’m a rich white guy, and I’m sick to my stomach thinking about it. I can’t imagine being a Muslim right now, or a woman, or an African American, a Hispanic, a handicapped person. How disenfranchised they might feel. And for anyone in those groups that voted for him, it’s just beyond my comprehension how they ignore all of that. My final conclusion is, my big fear is — we are Rome.”

It is not possible to select certain actions that Trump will implement and ignore the atmosphere and social environment he consistently stimulated. A vote is an all or nothing vote.

So how will I deal with the fact that some family members now display the same worldview as Trump? These white bread people living white bread lives do not understand, nor care about, the impact on people who are different from them.

There is a shadow inside all of us. My family members certainly opened the door to mine when I lashed out at them and said some unkind things and explained that my Latino, Muslim and LGBT friends are suffering, some being physically harmed by emboldened thugs.

I just completed a weeklong retreat at the Chopra Center in the San Diego area, called the Seduction of Spirit. It awakened the spirit within me. It was a reminder that we are all spirits having a human experience. I realized that my lashing out was wrong and I apologized.

I need to listen to my spirit. I need to send my family members compassion knowing that the Law of Karma will take care of things. I need to bring out the light inside me. I need to help my friends in need and be brave for them. I need to stand as an example of human compassion and dignity.

It will be difficult to live in “The Now” and take effective actions to reduce suffering and keeping my shadow in check. We all have to remember that human evolution is advanced more greatly through adversity. It’s the way the Universe works.

Everyday I wake up and recall the words Jesus said, “Forgive them Lord for they know not what they do.” For me it is the best way to get through this holiday season.

Gina is currently working at Novateur Ventures, Inc. in Vancouver, B.C. as the Head of Product Development and Manufacturing. In this role she will be assisting executives and company staff with strategic decisions, technical issues, regulatory concerns and managing outsourcing. Gina holds a BS degree in Pharmacy and a PhD in Pharmaceutical Sciences. After 32 years in the pharmaceutical and biotech industries, culminating in a number of senior executive positions and directly managing staff in the US, UK, Ireland and France, Gina has now incorporated personal growth and wellness approaches to collaborations and outsourcing. Incorporating these approaches in a technical business setting was driven by her personal struggles, as well as experience helping others in different cultures, with their unique personal growth. She lives by three simple principles: Tell the truth; Do the right thing; Be kind.