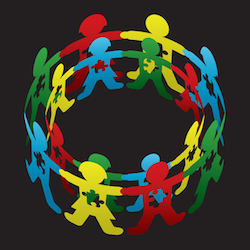 From Temple Grandin’s 1950 Diagnosis to Today

As we celebrate another Autism Awareness Month, I can’t help but reflect upon how far the world has come in terms of autism acceptance and awareness, as well as support and treatment for individuals on the spectrum.

While reports on the numbers of individuals being diagnosed, continues to rise, concerned individuals, politicians, schools, parents, non-profit and for-profit organizations are responding in kind.

While this is not to say there isn’t much more work to be done, we need to acknowledge our accomplishments.

When Temple Grandin was diagnosed with autism in 1950, it was the dark ages in autism understanding and treatment. She didn’t speak until she was 3-1/2-years-old and institutionalization was recommended, but not undertaken. She tells her story of “groping her way from the far side of darkness” in her book Emergence: Labeled Autistic.

Today, Grandin has a PhD and is the most accomplished and well-known adult with autism in the world. She is one of very few humane livestock-handling equipment designers across the globe, has written several best-selling books on autism and understanding animals, is a professor, and was the subject of an Emmy Award winning HBO movie, Temple Grandin, in which Claire Danes portrayed her. While Temple Grandin is unique, and hearing about her successes may be small comfort to parents of a non-verbal adult with greater challenges, strides are being made for individuals with autism across the entire spectrum.

Both Dr. Grandin and her Harvard educated mother Eustacia Cutler travel frequently speaking to educators and families about their experiences living with autism. In her late 80’s Cutler is now studying autism and its relation to the rapidly emerging bio-neurological study of brain plasticity. She discusses what causes rigid behavior in autism, the toll it takes on the family and how current research in the neural nature of consciousness is pointing towards insightful possibilities of change.

Our non-profit special needs organization, Durand, Inc. in Southern New Jersey is proud to host an evening with Temple Grandin and Eustacia Cutler and to present them with the first Dr. Durand Schulmann Award for excellence in the field of autism, on behalf of Durand’s founder who passed away in 2013.

Dr. Durand Schulmann also was a woman ahead of her time, one of the first child psychiatrists in New Jersey and an autism pioneer. Today, children with autism in kindergarten through 12th grade at the Durand School are communicating and learning with the latest technologies, including iPads and smart boards. There is a verbal recognition classroom and music program, several certified behavior analysts, and the latest treatments in occupational and physical therapy. Parents are reporting substantial improvements in their children’s level of functioning, mood and behavior. Adults with severe autism are performing meaningful work at Durand’s two adult training service centers, and living in our nurturing group homes. Families are supported in their own homes and out with a variety of Durand services and education.

Further updates in the field are covered in Temple Grandin’s book, The Way I See It, A Personal Look at Autism and Asperger’s, which was recently republished to provide 12 new articles and revisions based on the most current research on the autistic brain and therapies.

Popular culture has also come a long way in depicting realistic individuals on the autism spectrum, from the movie, Adam, to the TV series Parenthood. No longer is Dustin Hoffman’s Rain Man character the single prototype for autism. Just google “autism in popular culture” and there are more than 5 million results.

More employers are recognizing the uniquely positive advantages that individuals on the autism spectrum can bring to the workplace in terms of focus and diligence, among other skills. Many more such employers are needed.

Changes and improvements will continue to come and are necessary as greater numbers of autistic individuals enter adulthood. But in 2015 during Autism Awareness Month, we’ve come a long way from the days that an autism diagnosis meant a recommendation of institutionalization. That’s what I call good news.

This author of this article is Raymond Cristofoletti, Executive Director of Durand Inc.

Delivering the support you need for your stressful life events today. You are not alone. Every day a family, just like yours, begins a transition into a new way of life. If you’ve just experienced a life changing event such as a divorce proceeding, caring for aging parents, received a cancer diagnosis or are coping with special needs children, know you’re in the right place.