Home / Editorial Monthly Focus / The Gift of Helping Others 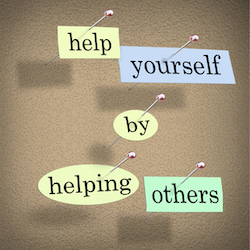 My parents did everything together during their 55-year marriage. You’d have thought they were joined at the hip. Each was deeply devoted to the other. What’s more, mother was completely dependent on dad. She never did anything or went anywhere without him. Ever.

When he passed away, we had no idea how she could ever keep going. It turned out that we were right to question her ability to function independently. Shortly after dad’s death she fell into a deep depression and couldn’t care for herself. She even tried to commit suicide. So we moved her to Autumn Years Lodge, a nursing home near Ft. Worth, Texas, where she lived out the last seven years of her life.

Much to our surprise she soon adjusted to life in the nursing home and little by little her mood improved. In fact she became cheerful by nature. The nurse practitioner there once told me, “Flora is a ray of sunshine in a dark place.” That made me burst with pride.

In the mornings, after putting on her lipstick and fussing with her hair, she marched to the dining room and ceremoniously picked up two cups of coffee. Yes, two. But they weren’t for her. No. She went right back down the hall and delivered them to two residents who were bedridden and otherwise would have had to wait a couple of hours until the aide wheeled them to the dining room, where they got their coffee.

But mother felt it was important to have coffee the very first thing in the morning. She didn’t want the residents to have to wait so long. And it wasn’t just those two cups. There were more people she deemed urgently in need of her coffee service. She continued on her daily mission and delivered coffee to a total of eight people. Every morning. Without fail.

Mom enjoyed her self-appointed duty tremendously. And it didn’t go unnoticed by the facility’s staff either. Once the administrator told me they were going to make a volunteer badge for her. I was overjoyed to hear that.

Her service to the residents didn’t end with serving coffee either. She was alert to people’s other needs and always did whatever she could to help them. For example, the head nurse told me that on one of the weekly outings to Wal-Mart, mother bought a pair of socks for a lady who had none and had no money to buy any. It seemed like such a simple gesture, but to the recipient it meant the world. She needed those socks to keep her feet warm in the winter. I was genuinely touched by her generosity.

Mom also ‘adopted’ a young lady at Autumn Years. In her early forties, Mary was confined to a wheel chair because she’d had a serious stroke. No one ever visited Mary. Mother not only served her coffee, she spent a lot of time with her, sitting with her at mealtime and talking with her for hours at a time in her room. The first time I visited mom – I lived out of town – Mary quickly and cheerfully wheeled herself into the room and told me how much she loved my mom. She even called her ‘mother.’ Seeing them together in animated conversation was deeply meaningful to me.

I was elated to see mother so happy. To see her functioning so well. And I was thrilled by what she did to help those less fortunate. Equally important, I would never forget all her selfless acts. The memories would remain with me forever, and I have been inspired to follow her example in my own older age.

I learned from mother that helping others is special. That one receives so much more than one gives. That service to others brings great joy to the giver. But most of all I learned that loving others gives an extraordinarily rich meaning to life. I will be grateful for these precious lessons all of my remaining years.

This blog is written by Marie Marley and originally appeared on MariaShriver.com