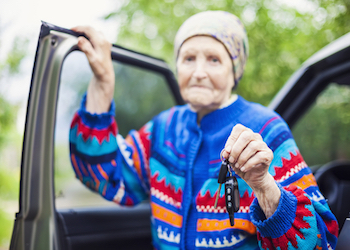 I speak to community groups regularly to help advance Alzheimer’s awareness and lend support to families in crisis. When and how to get a compromised “parent” to stop driving is a common concern for families.

We are acutely aware of the perils of driving drunk or distracted by texting.  But driving with any impairment, including reduced reflexes, poor vision, waning cognition and judgment, can have tragic consequences.

As my mother’s dementia advanced she got lost driving to her dentist literally one mile from her apartment and ended up two counties and twenty miles away.  How she ever got home without an incident, I don’t know, but gratefully she did.

Unlike many older people who stubbornly resist relinquishing driving independence, my mother’s debacle scared her.  When she willingly handed me the keys, my biggest fear was averted.

However many families tell horror stories about their compromised parent or aunt/uncle when “the stubborn old coot” flat out refuses to stop driving.  They deny their physical challenges and definitely the cognitive ones like memory loss or impaired judgment.

If your loved one is a menace behind the wheel, you have a
moral obligation to keep them and everyone else on the road safe.

Some have asked the doctor to be the “bad guy/gal” and tell the individual they can’t drive anymore. And others have employed some ingenious and humorous techniques.

Several caregivers have “hidden the car keys” so their compromised loved one won’t find them. But someone driven to drive can be surprisingly savvy.

Savvy Dad: A woman shared that she had hidden her dad’s keys in different places in the house, but he found them anyway. She didn’t want to completely remove the keys as her brothers used their Dad’s car sometimes too.

After a few failures, she hid the keys in what she thought was the perfect spot: the gravy boat that no one ever used.  But Dad found them there too.  He remembered that the “gravy boat” was where he used to hide things from the kids when they were little.  Dad clearly remembered the connection but she had forgotten it at first.

Conceding defeat, they had multiple sets of car keys made. Only resourceful dad checked his son’s jacket pocket one night and voilà, Dad had driving independence back, briefly.

Frozen: Another daughter admitted that out of desperation she tossed the keys in the icemaker only to discover months later that they didn’t work.  Probably from long-term exposure to moisture and freezing, the chip or battery was toast, well frozen actually.

In the shop:  One family literally took the car from their 91 year-old uncle who had debilitating balance and vision issues. A year earlier, the gentleman actually had failed his driver’s test due to compromised vision but drove anyway saying, “I don’t need a license. I know how to drive!”

After too many close calls his favorite niece developed a plan sanctioned by the other nieces/nephews. She asked if she could borrow her uncle’s car as hers was getting serviced to which he agreed. Hours later she returned to her uncle’s “crying” and told him a fictitious story that she “been involved in a car accident.” The uncle was compassionate and gave her a hug.

For months, while the uncle’s car was being “fixed” the family provided transportation and ran errands, etc. complicit in the charade. As their uncle continued to decline, he stopped inquiring about the car.  He was 94 when he passed away, but no one else did because the family was proactive.

Stolen: One daughter, worried about her memory impaired mother, moved her mom’s car to the church parking lot one street over and then walked back to her mom’s. Later with the help of her girlfriend, she drove the car to the friend’s  and left it there. It was a few days, but eventually Mom noticed her car was gone.

“Someone must have stolen it,” the daughter suggested suppressing a smirk and volunteered to report the fictitious theft.  Mom asked about the car for a few months but eventually forgot about it.

The Director of an Assisted Living Center, Marie, shared that her mother Clara had impaired driving skills and poor judgment. One evening Clara called Marie and said the car was spewing smoke. Marie called her uncle, Clara’s brother Jacob, and asked him to check out the car. He found nothing to indicate any problem or even evidence of any smoke. But Marie shared her concerns about Mom’s poor driving abilities and suggested a plan that Jacob played along with.

Jacob told his sister Clara that the car had to go into the shop. Coincidently a few days later Clara’s sister Betty’s car was totaled. So Jacob and Marie decided to have Clara’s car repainted and give it to Betty.

In an ironic twist, Betty started chauffeuring her sister to appointments and running errands in what was Clara’s repainted car without Clara ever making the connection! She didn’t even recognize the interior as familiar.

For a few months Clara asked Jacob occasionally about repairs on her car but gradually her inquiries stopped.

Avert a tragedy in the making by proactively taking the keys so someone who shouldn’t drive, doesn’t! Ever!