Home / Life Help / On Gratitude and Dwelling in Possibility 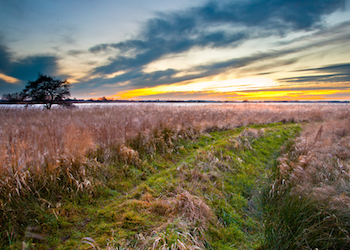 Recently, I went to an outdoor concert with some friends. Mavis Staples, a fabulous gospel singer in her
seventies, was the headliner. There was no formal seating for this concert and by the time my friends and I arrived,the hillside in front of the stage was jam-packed with people sitting on blankets, coats or just the grass. We had to go far uphill to find a spot.

Directly in front of our spot was a steep part of the hill that was too steep to sit on. Random bits of cardboard were littered at the bottom. It became obvious that someone had put them there for children to use as sledding devices because about twenty or so children were doing so.

I was sitting between two friends. The one on my left befriended a small boy, about four years old, with a curly
mop of red hair. He had four small pieces of cardboard. He put one under each butt cheek and one under each foot.
He thought this was an ingenious plan, but each time he only got about a third of the way down the hill before he
came to a screeching halt. Then he would happily scramble up the hill, give my friend a high-five and
proclaim, “This time I’m going to get all the way down!”, and she would heartily agree.

At one point he decided to go down on his stomach to see if that would work better. It didn’t. At his typical stopping point he looked up at us and beamed with as much joy as if he’d slid all the way down. I leaned to my friend and whispered, “I’ve never seen so much joy in total failure!”. She smiled at me, and then turned to beam at the boy, declaring him her favorite.

The friend to the right of me had a different favorite. This was a small girl, also about four years old, with a
tomboyish pixie cut and pink baseball cap that suited her mischievous, determined style. She found by far the
biggest piece of cardboard.

After a bit her older brother came up to her demanding that she share. Begrudgingly, she tore off a very small
corner for him. My friend and I couldn’t help laughing. The boy knew that asking for more was pointless and he
flounced off. The girl didn’t mind at all and kept sliding.

At one point something made her mad and sad. I didn’t see what it was but I saw her face scrunched up and red
from crying. I thought, “That’s it she’s had enough.” But I was wrong. Furiously, she grabbed her cardboard and,
with absolute disgust, flung it from the highest point as far as she could. Even though the cardboard did not fly far nor was there even a satisfying, ‘thwack’, she didn’t mind. It was enough for her to make her own point: “I will not be bound by your limits you stupid, rotten piece of cardboard! I’m done with you!”.

I still thought that for her the game was over. But again I was wrong. Once rid of the offending piece of cardboard
she came back to the hill and started to roll down it on her own.

I loved the gospel music but we were so far away it ended up serving as back ground music to this show.

And I learned so much from that show, from those children. It was like a microcosm of all life. True, there
were downsides to the fierceness, self-propelled determinism and the ‘survival of the fittest’ mentality. Yet, for once, the upsides of life were far more obvious, and not because, I was being told to ‘Stay Positive’, or forcing
myself to be grateful.

The only real difference between the children and I on that hillside had to do with awareness. The adult in me was
happy to be an observer and not a participant, aware of how much I might hurt if I did!

Children are blissfully unaware of how much might hurt and how quickly everything passes, but I learned that day
that I could reclaim some of their bliss by staying aware of the moment, with a mixture of love and awe, and, perhaps, most of all, letting go of judgment.