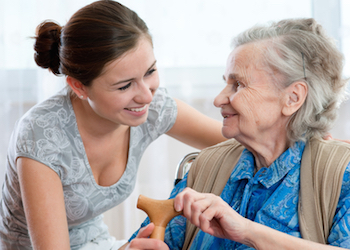 Part 1, When to Consider an Assisted Living Facility, dealt with the reasons why a loved one needs increased supervision.  Maintaining Safety is at the heart of all issues for which increased care is necessary.  Elderly people may have a number of complicated health problems, but decreased judgment and increased confusion compound the situation.

Continuing to live in the home has been ruled out or tried and proven disastrous.  Selecting an assisted living facility is next.  .  I’ve walked in those weighty shoes also.  I did everything right in selecting a placement for my mother and yet she nearly died at the facility I entrusted with her care!
The Elegant Lobby is for Your Benefit

The elegant and welcoming lobby was designed for you, not for the person to be residing there.  You can expect that it should be inviting and clean; the absence of either speaks volumes.  But otherwise a beautiful lobby just means they hired a good decorator.
“Let Your Fingers Do the Walking”

If you’re past  55, you probably remember the commercial for The Yellow Pages promoting using their phone book to call ahead for information.  Despite technological advances unfathomable when I was a kid “some things never change.”

Waiting Lists. You can rule places in or out with some strategic phone homework.  If you are on the cusp of relocating your parent within a relatively short time frame, like I was, then any facility with a waiting list is probably out.  Waiting lists are a completely unknown variable; could be a week or a year.

Cost.  Phone discussions as well as internet research, can shed light on a facility’s cost structure.  I encourage the old fashioned, reciprocal phone conversation because it’s the best way to clarify terminology and come away with the clearest understanding possible.

Some sample questions include:

Listen and Learn.  I listened to each director’s information throughout my various facility tours, but my attention was elsewhere.

* I observed every employee’s actions, every overheard word, every interaction between and among the staff and residents.

* Did staff roll their eyes at each other to express subtle disgust when they thought they weren’t being observed?  Was a caregiver offering a resident a helping hand or a disrespectful vice grip?  Were repeated calls for help ignored?  Did staff seem to actually know the residents?

* I meandered down hallways, into the kitchen, stuck my head around corners, peered into resident’s rooms and opened a few shut doors just to see what was going on behind them.  I was listening, watching and learning from the important peripheral activity.

Preparing for the Fallout

You’ve done exhaustive research, selected a center, made countless weighty decisions and moved your loved one.  But be prepared for the emotional fallout lurking around every corner of every variable.

Dementia’s creates a reality for the individual that is anything but real!  Memory, reasoning and behavior are completely splintered.  My mother’s catastrophic fallout, wicked accusations and anger blindsided me.  Despite her promises that she would be “fine,” she was anything but “fine.”

If you find yourself second-guessing every decision, remember that any move is disruptive and disorienting.  It’s very difficult to step into the role of being a parent to your parent.

Just as there are five stages of dealing with loss, there are parallel emotions for caregivers wrestling with stepping up and into the role of parenting our parent.  Guilt!

At any point along this formidable journey of making arrangements, signing your life away, or that of your parent actually, guilt may invade your consciousness and undermine your resolve.

You made the wrong decision!  Waited too long or acted too soon!  It happened to me too.

Despite my best efforts to select a top shelf assisted living facility, 2 despicable staff created a situation that nearly lead to my mother’s death. If she had died as a result, it would have been negligent homicide!  That said, a 148 of 150 people working at Mom’s center showed up every day and did their respective jobs very well.  The other 2 were fired!

If you have made thoughtful decisions out of love for
someone else regardless of the consequences, you have done well!

A truthful a message as this is, I couldn’t be consoled when it happened to me.  Just guilty!