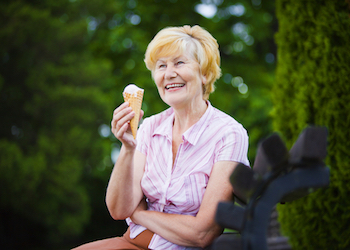 Trying to Appease Someone with Dementia

We say the words “someone with dementia has memory problems” but what impact does that have on how situations are handled?

A lovely woman, Jean was in the audience at one of my presentations recently and shared this story about trying to appease her mother with dementia.

Jean’s mother Edith had been exhibiting negative personality changes and memory decline steadily for some time.  Jean proactively relocated her mother to a more secure setting before injurious disasters occurred.
Edith was grumpy about almost everything Jean did.  Transitioning to a new environment is very stressful for someone with diminished memory, impaired reasoning and judgment.  Even if they “agree” to the move, they don’t remember “agreeing to the move”.

My mother had told me repeatedly “Just put me someone place nice and come visit me once in a while.”  But when I did just that, she was angry, vocal and even kicked me.

From I Will Never Forget, Chapter 35: Petite but Perverse

My “Hi, Mom” was met with “I have a bone to pick with you!” She was standing in the lobby. Before I knew it, Mom rotated her left hip, leaned onto her left leg, and hurled her right foot into my butt and kicked me.

Six months after her relocation, Edith had “mellowed out a little” according to Jean, but was still edgy and unpredictable.  Abruptly one day, Edith started complaining about ice cream.  “You never take me out to get ice cream.”  Edith whined.

Easy button Jean thought.  So, Jean took Edith to the local ice cream shop, BJs parlor, the next day.  On Jean’s return visit that evening, Edith complained again “You never take me out for ice cream.”
Naturally Jean’s efforts to remind her mother that they’d gone out that afternoon was met with indignation.  “No you didn’t!”  So, they went out again.

The next day, Jean was met with another round of ice cream complaints from Edith.  They went out in the afternoon and then again that evening.

Jean shared that the exact same scenario played out over several days.  Jean tried to end the ice cream excursions, but every time she deflected, offered an excuse for not going out or tried to set actual boundaries, Edith dissolved in anger and tears.

Finally, after what Jean reported to be 13 ice cream parlor visits, she had had enough!  Jean creatively arranged a rouse with her friend in the police department.

On the 13th trip out, the “police” pulled Jean over.  As the officer was approaching the car, Edith remarked how loud the police car siren was and how big the policeman was.
By design, the “big policeman” looked directly at Edith and accusingly asked, “Where are you going?”
“Ice cream.”

“At BJs?”  Edith said nothing.

“You can’t go there anymore Edith!”  The officer said firmly.

I was skeptical but surprisingly the rouse worked; no more ice cream mandates.

Jean explained that her mother had been pulled over once or twice, as many of us have.  But Edith became exceedingly over anxious and upset, more so than most people.  Playing on that apprehension, Jean was hopeful that her idea would stop Edith’s ice cream whining.  And it did.

Not every tirade, emotional breakdown or perseveration can be managed easily. The point is to try different strategies knowing the idiosyncrasies unique to that person.  Kudos to Jean for thinking outside the box.  I might have suggested employing a solution before 13 ice cream trips, but eventually something worked.