Home / Divorce / Marriage Counseling: When to Fight for it and When to Let Go? 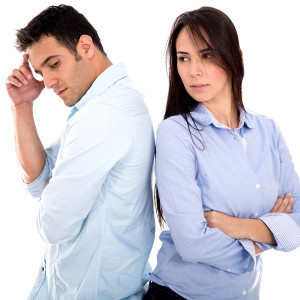 I spoke with a client today about her marriage. I will call her Mary.

I said to Mary that recently it seemed her marriage was something she avoided talking about, even more than her symptoms. She said, “I don’t know about that. I was at a work function last week and was very symptomatic.”

This is a client who is a very successful Financial Advisor, but she herself has a gambling problem. She lives with the irony of this every day, but has come to have an understanding that in her family (and in her marriage), money is both an expression of love and a punishing withdrawal of love and approval.

She has always felt like her mother’s love was somewhat conditional and based on how well she did in school. Her mother would alternately threaten to exclude her from her will when she was angry with her, and later ask her to take care of her in her old age.

Coming to understand some of her deeper issues with money seemed to visibly improve her deep feelings of shame and embarrassment about her gambling problem.

She was also beginning to see that part of the function of her gambling was to distract her from unhappiness in her marriage. She is the primary breadwinner in her family, and although her husband is the primary caregiver to their children, she believes that his, as yet, untreated ADHD, makes him under function in that role too.

For his part, he is furious with her for being so reckless with their funds. He also feels under-appreciated in the role he is serving. However, right now he is not willing to be part of the therapeutic process.

I am torn, because I wonder how much more Mary’s symptoms would improve if she actually left her husband. I also wonder if he would have no choice but to learn how to function more self-sufficiently if he were on his own. Last, but the opposite of least, I wonder what would best for the children: living through a divorce or staying in an unhappy marriage.

None of this is exactly my place to say, obviously, since a therapist is not supposed to give an advice, but I still wonder.

I believe that in an ideal world, they would each resolve their own issues around money. The wife, who over-functions and under functions simultaneously, would learn she deserves to be loved unconditionally.

And by this, I do not mean that she would continue to behave unacceptably around gambling and expect that to be excused. I mean, she would come to trust that she deserves to be loved so much, she no longer needs to act out in unacceptable ways, either as a way to find an unhealthy substitute for that love, nor as a way to prove what she’s feared all along: she deserves to be rejected.

Her husband would understand his ADHD as both a blessing and a curse, and be willing to get help to minimize the curse-like aspects of having that disorder. He would learn that when his wife (and parents) label him as irresponsible, this is about their frustration with how his disorder affects them, and that, in reality, this problem does not define all of him. He would also increase his understanding of his own strengths and expect to be appreciated for them.

This is a lot of individual work to pull off within the context of what would ideally be a couples therapy case. So, these days, when I work with a couple I try to see each of them individually and intersperse this primary work with occasional couples therapy sessions.

The difficulty inherent in this model is when one person is willing to work on their issues and the other is not. It’s a fairly new way for therapists to work, and so there is some controversy around it. To manage potential disasters, I set up clear expectations about boundaries and understanding about the limits of confidentiality in this context.

What I and many other therapists are noticing is that when those boundaries are in place, this way of working can be tremendously helpful. When both people are engaged in this process, I have noticed transformational changes in the quality of the relationship.

When one is and one isn’t, well, let’s just say, it hasn’t been so great.

The relationship tends to stay unhappy or they tend to part. It’s hard not to have my own opinions about this, even as I know it’s not really my job to share them.

But there is really no such thing as a therapist with out a personal bias. My own will always be to encourage the ideal first, foremost, and with as much gusto as I can muster, and also for as long as I can muster. I am aware that people are not always ready for things at the same time, and that much patience is required, but when it becomes clear that one person is not ready or willing to work on their issues, I am becoming more okay with the idea that sometimes it really can be healthier to let go.

What is best for Mary and her family, you wonder? Well, that is still to be determined. Unless there is overt abuse, it’s always best when the therapist “let’s go” of the outcome. At least I can say everything I’ve said here, and I do.