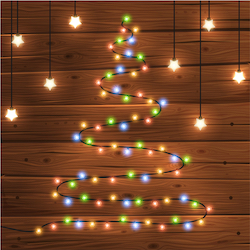 Holidays are hard for divorced parents – even when they’ve mediated a parenting plan they both agree on and believe is in the best interests of their children. A typical custody arrangement might mean that dad sees the kids Thanksgiving in odd-numbered or even-numbered years, and mom has the kids for Thanksgiving in the alternate years. There is, of course, an ache each parent feels when it’s not their turn to spend a holiday with their children.

Still the pain of divorce runs deeper than missing your children, especially during the holidays. Divorce doesn’t just separate two immediate families – it separates two extended families as well. I remember when my mother’s sister divorced. Gone forever from our holiday dinners – from our lives – was my aunt’s husband – my favorite uncle. Gone was his a great sense of humor. (He loved that we kids called him “Uncle Mod” because of his fat sideburns.)

In mediation, we encourage people to talk about the loss of extended family – or they often bring up the issue themselves. And yes, we have brainstormed solutions that parties feel are workable, and they are relieved and grateful to resolve. (In a litigated divorce, it is expensive to discuss these matters – and they are almost always forgotten because litigating lawyers aren’t attuned to discussing extended family; and the parties themselves are often too overwhelmed complying with court orders and the other side’s demands to even think about anything but their most pressing issues.)

In one of our mediations, the subject of extended family was raised out of the blue. When the parties were discussing holidays, the husband spontaneously said, “I’ll miss seeing Jim.”  The wife was taken aback. “He’s really going to miss you too.” They both started crying. Jim, it turned out, was the wife’s sister’s thirteen-year-old son. Jim adored the wife’s nephew, and the feeling was mutual.

Both parties realized that extended family was affected by their divorce; they wanted to minimize this impact. The wife agreed that her nephew shouldn’t suffer the loss of her ex’s company. The more the couple talked, the more they realized that their extended families really cared about each other. And they came up with a solution that both felt was right: they agreed that having Thanksgiving together for the first few years would be helpful not only to their children, but also to all the nieces and nephews.

That result was nothing new for us. We’ve even mediated a divorce in which the ex-wife ended up going to her ex-brother-in-law’s wedding. Holidays and special occasions mean family – not just immediate, but very often extended family. Even with divorce, your ex’s relatives don’t have to suddenly become strangers. Creative solutions can keep ties to people that you still care about.