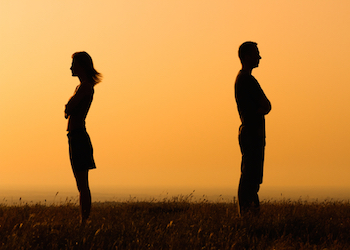 My husband and I sit on very different sides of the political fence. Generally this works for a couple of reasons. Most importantly we decided at the very beginning that the only way our relationship would or could work is if we both agreed not to make the other feel stupid or wrong or bad for each other’s beliefs. We could follow the American dream and get along together peaceably as long as we were agreeing to disagree respectfully. The other reasons it tends to work is that we are both pretty ‘conflict avoidant’.

That worked well until the last election cycle when I wanted to ‘come out’ loud and proud as a Hillary supporter. I could explain why but it’s not really what this article is about. Suffice it to say, it brought up more conflict at home, not because I was/am a Hillary supporter, my husband already knew that, but because I wanted to be more vocal about my beliefs than before.

In the long run, I think it’s made us even stronger as a couple. Neither of us has changed the other’s mind, but we are better able to face deeper conflicts with each other and resolve those, like why we both still tend to get very reactive when this topic is brought up, instead of being our typically logical and kind to each other selves. We have both had several ‘break throughs’ recently and it feels liberating to us both not to feel so bound by our “flight, fight, freeze” reactions, at least with each other.

Unless we are in actual danger of being hit by a car, eaten by a lion, etc, etc, overcoming some of our “flight, fight, freeze”reactivity to danger that is perceived more than immediate, will make us all stronger, as individuals, in relationship, and even as a country. It is admittedly a long journey to figure this out because our ‘primitive brains’ have programmed us well to jump, when they tell us to jump. My 10th grade biology teacher liked to joke that there are 3 F’s whose job it is to promote the survival of the human species: fight, flight or reproduce. This still makes me giggle. But mercifully, thanks to the great democracy we live in, the ‘danger’ we react to is often more perceived, or at least not immediate, and reacting rather than responding more thoughtfully often ends up causing us more harm than good.

Most of us have a dominant reaction that we are more programmed to turn to: Chasing like one of Hemingway’s bulls straight into red flags, or making nice for as long as we humanly can, and then imploding or exploding, are two examples.

The truth is those who prefer to run from conflict are usually very nice people. They would rather get hurt themselves than hurt someone else’s feelings. They are funny, sweet, kind, generous and loyal. Yet everyone has a shadow side; theirs can often be passive aggressive. They can stonewall, refuse to talk, ‘ghost’ you out, or make snippy, snide, sarcastic digs at you with veritable steel in their eyes. Everyone has a primitive brain, capable of the ‘fight/flight/freeze’ reactions to danger. Sure, theirs tends to run more to prey than predator, but pushed too far, they can also become a force to be reckoned with, sometimes more dangerous than their more aggressive counterparts because you expect it less from them.

People often say that they prefer those who are more open, direct, even blunt about their feelings because ‘you know what to expect from them’. But more direct people have their own shadow sides too. They think before they speak, become hot-headed and escalate conflicts into unnecessary dramas. They can become bullies or abusers at worst and arrogant and overly opinionated at best. Perceived power protects them in illusory ways from their own vulnerability.

Ideally, we are always working for balance, and a way to address the conflict more from the neocortex (front of the brain) where we get to think through and respond constructively rather than react from the more primitive amygdala, where the fight/flight/freeze reactivity is on constant alert for signs of danger.

My own wish is to become better and better at figuring out in the ‘blink’ of an eye, as Malcolm Gladwell suggests is possible, whether I am actually in life threatening danger. If I am, I would like to continue reacting immediately in whatever way is most likely to best protect myself and those closest to me. If I decide, on the other hand, that I am not in immediate or life-threatening danger, I would like to be able to transfer the problem solving ability back from my amygdala to my neocortex, and quickly become able to re-center and decide, “What is the wisest thing I could say or do right now to stand up for myself and also work toward repair with the other?” Sometimes it’s as simple as saying, “Uh, let me think about that for a bit. I’ll get back to you this afternoon about this. Is that okay?”

Buying ourselves time, or a “Grown-up Time-out”, is a great trick for ‘flighters’ and ‘fighters’ alike. I have often regretted the moments I have forgotten to declare that I need one. You can tell you need one when a conversation starts to turn ugly or irrational. Try saying, “I need some space for x amount of time (calculate how much time you predict it will take you to calm down) and I promise I’ll come back when we’re both calmer (say ‘we’ even if you’ve been calm as a cucumber and the other is being a raging lunatic) and we can talk it through then”. The ‘grown-up” part is remembering not to abandon the other person.

Fear of abandonment is huge, even in people who are professing they hate you, (like teenagers). Being angry at their hatefulness makes it easy to simply storm out or leave. However, slowing down long enough to say that you will return, and when, and following through are the most important parts of this exercise.

In the space between, taking five to twenty minutes to rage against the other (out of their ear shot of-course) is always a good idea. A journal, a best friend, therapist, a good scream in a parked car come in very handy at times like this. The important part is that no-one gets hurt.

There are plenty of tools already written to help the “fighters” manage their anger. There is even a funny movie called, “Anger Management”. But what about those of us who tend to run the other way as long as possible? There are three main reasons ‘conflict avoiders’ tell me they do so. Let me write these one by one and provide some alternative possibilities and tools to help counteract each of them.

First, they say they are afraid to hurt the other person as much as they’ve been hurt themselves.
One way to tackle this fear is to make a distinction between hurt feelings and hurtful words or behavior. Unfortunately hurt feelings are normal and unavoidable in relationships. People feel hurt when the other does not want the same thing they want.

This is not the same as hurtful behavior or words which ooze contempt at the other for being wrong, stupid or ridiculous or try to control or ‘guilt’ the other into ‘doing it our way’. If we stick with the “Grown-up Time-out”, we will learn that we can avoid falling into this pit most of the time. Sometimes we will fall down, or when we are actually in life-threatening danger, all bets may be off. But later on, we can make repairs as best we can, perhaps apologizing for how we said something even if we are still hurt and angry about what was said or done to us.

However, it is important to remember that we are not engaging in hurtful behavior, just by saying what we want and need, even if the other person feels hurt that we want something different than they do. This is especially true when we are willing to ‘let go’ after we’ve said what we want or need, and give the other person plenty of room to decide what they think, want or need. Negotiating at this point is also not the same as trying to control or guilt the other person into our way of thinking.

The second reason people tell me they avoid conflict is they claim, “There’s no point. No-one has ever listened to my side before, so why start trying now?”. My challenge to that is to say that the point of speaking our truth is for our own sake first and foremost. It is the icing on the cake if the other person can or will hear it. The ‘cake’ is walking away with our own self-esteem and most of all, our self-respect not only intact but also actually enhanced. Speaking our truth is empowering, if terrifying. Maggie Kuhn, the great Grey Panther, reminds us to, “Stand before the people you fear and speak your mind – even if your voice shakes.”

The last reason people say they avoid conflict is for their own safety. The fear of retaliation may be real. It is always important to choose your battles as wisely as possible. A wise client of mine often quotes Bernard of Clairveaux . In the 11th century he was in charge of a monastery and he said of leadership, “Notice everything, remark on a few things and reprimand little.” Sometimes there really are times that it is important to find the courage to speak your truth, protect yourself, your loved ones and your values.

In these times it is worth it, during the space you take for yourself, after your rage has burned through a little, to pick one or two main things you would most like the other to understand. Write them down in a way you know if someone else said them to you, you would be able to hear. And give it your best shot. You can always go back for another “Grown-up Time-out” if things get ugly again. And if they get too ugly, as happens rarest of all, it may be time to exit that relationship as gracefully as possible, and try again with others more open to your point of view, and at the very least less dangerous to you. Stay safe out there, to be sure, but also stay true, stay true to you.