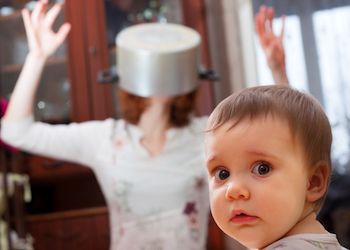 My mother was an extraordinarily patient woman as is my daughter with her three young kids.  Me, not so much!  I think I was a great mom raising my daughters and based on the accolades they often give me, I think they’d agree.  Patience however was not my strong suit.  They might agree with that too, but I haven’t asked.

My strength was non-impulsive rules!  I didn’t threaten the girls into compliance with consequences I couldn’t or wouldn’t enforce.  “If you do (or don’t do) this, then I will (or you won’t) do that.”  My girls would agree to that too.

A while back I witnessed a disappointing exchange between my cousin Mark and his seven year old son Jeff.  As background Mark is gracious, patient and genuinely loves his children; he and his wife Carole have an eight year old daughter also.

Mark’s kids are very active, confident and, especially in Jeff’s case, impish.  I’ve been at their house often enough over the years to realize Mark is embarrassed when the kids behave poorly in public or when they have company.  He may be aghast but he doesn’t actually do anything to mitigate the situation, reasoning that he draws more attention from restaurant patrons or guests.  Uh, no!

I am aware of but otherwise ignore rowdy kids being appropriately corralled or disciplined by their parents.  However, I want to initiate a stare down with people like Mark who just shush them repeatedly or worse, threaten them with retaliation they won’t act on.!

Consider this true exchange:  Jeff and his sister Celine were arguing and hitting each other (I think sticks were involved too) late one Saturday morning when I was visiting.  After Mark twice warned them to “cut it out” which the kids completely ignored, he imposed a time-out.  “Go to your room.”  Nothing.  He said it a second time. “If you can’t behave, go to your room.”  Celine went to her room but Jeff didn’t budge.

Next Mark said, “Jeff, go to your room now or you won’t go to Miguel’s birthday party this afternoon!”  Jeff crossed his arms, turned and walked back outside.

My cousin didn’t do a thing except throw up his hands and grumble.  Jeff went to the party anyway.  I went home.

Incidents like this have happened many times when Mark threatens an outcome he won’t impose.  He is touchy and defensive at times and has ignored my efforts to (carefully) empower him with alternative parenting techniques in the past.

Kids are narcissistic, push all kinds of buttons and test the limits.  It’s in their “job description”.  Besides loving and caring, it’s the parent’s “job” to model and teach appropriate behaviors, critique unacceptable ones and enforce ramifications to their children’s push back attitudes and actions.

By contrast my daughter and son-in-law set the bar for effective patient parenting.  They are teachers and attribute their parental skill set in part to the instruction they’ve received on techniques and strategies for classroom management.

Stepping in to critique a child that’s not yours launches vast array of possible outcomes.  One parent might welcome your assistance and another might perceive it as interference.  In my opinion, though, some situations require immediate attention.

A child, old enough to know better, throws a rock at an animal at the zoo or another child.  If Mom or Dad doesn’t handle the situation, another adult should.  If tweens or teenagers at a mall for example are running up/down the escalator, an adult should intervene on that too.

My advice is do not touch the offending child/children. Rather project authority by your voice, manner and succinct expectations.  “Stop running on the escalators.  It’s very unsafe for you and others.”  Identify the errant behavior.  Express the expected outcome.  Explain the rationale.

Anyone, anytime, any situation can be captured on personal phones or security cameras. It’s intended to deter criminal behavior and keep people safe.  Unfortunately, recorded exchanges can also generate negative consequences for the good Samaritan trying to help.  Be responsible but be careful!