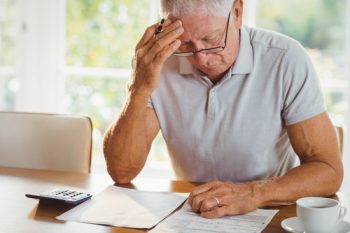 A recent episode of CNBC’s American Greed highlights the rags to riches back to rags story of former basketball star Rumeal Robinson. When Robinson turned pro in 1990, he signed a multi-million-dollar contract, and like so many other young athletes that suddenly find themselves with a boatload of cash, he began living the high life. Predictably, Robinson blew all his money, retired from pro basketball, and ended up in the poor house.

While on his way down, Robinson not only swindled unsuspecting bankers out of well over a million dollars, he also cleaned out his own mother, causing her to be evicted from the home she’d lived in for most of her life. Robinson had approached his mother about an investment scheme that he promised would make her a millionaire. She agreed to help him and signed over her house to him. Over the next few years, Robinson squeezed every dollar he could out of the home’s equity, leaving his mother high and dry.

Sadly, the financial elder abuse that occurred in the Rumeal Robinson saga is far from an isolated incident. According to the Alzheimer’s Association, roughly 15% to 20% of individuals age 65 and older have mild cognitive impairment (MCI). Out of the 25 to 30 million seniors age 71 or older, the National Institute of Health (NIH) found that roughly 35% have either MCI or dementia. These conditions make the elderly far more susceptible to financial exploitation.

Types of Senior Financial Abuse
The Older Americans Act, a law passed by Congress in 1965 that has been amended and reauthorized several times since then, defines elderly financial abuse as:

The fraudulent or otherwise illegal, unauthorized, or improper act or process of an individual, including a caregiver or fiduciary, that uses the resources of an older individual for monetary or personal benefit, profit, or gain, or that results in depriving an older individual of rightful access to, or use of, benefits, resources, belongings, or assets.

Senior financial abuse or exploitation comes in two primary forms; outside financial scams and frauds, and exploitation by someone close to the victim.

Outside Financial Scams and Frauds
Seniors are frequent targets of fraudsters who target them with phone calls, mailers, and other types of misleading marketing. These scams are sometimes even perpetrated by unscrupulous individuals working for otherwise legitimate organizations.

Conditions such as mild cognitive impairment cause changes to the brain that make seniors more trusting and less risk averse. This makes them far more likely to trust what a scammer is telling them, even though most others would find the proposition “too good to be true.”

There are numerous examples of outside scams that target the elderly. Some of the most common include:

Loved Ones and Caregivers
Elder financial abuse by close relatives and caregivers is far more widespread than most people believe. This type of abuse can come in many forms, such as:

The perpetrators of elderly financial abuse against someone close to them often justify and rationalize their behavior. For example, if they are the family caregiver, they may believe they are entitled to financial compensation for all the work they put in. Perpetrators may also be motivated by financial difficulties of their own (e.g., gambling and/or drug addictions), dislike for their siblings, fear that they will not otherwise receive their rightful inheritance, and other reasons.

In the case of Rumeal Robinson, he was not the family caregiver; in fact, his mother lived alone in her house and for the most part, she was self-sufficient. In this case, Robinson simply had an insatiable spending appetite and no longer had the income to satisfy it, so he took what he could from his own mother.

Elderly Financial Abuse Indicators
Just as with physical and psychological elder abuse, it is important for family members to be on the lookout for signs that an aging loved one may be the victim of financial exploitation. Some potential warning signs may include:

Your loved one does not seem to know or understand his/her own financial situation.

Senior financial abuse is hard to stop once it is occurring. Many times, victims do not want to believe they are being victimized, and even after it is clear they have been ripped off, they are often reluctant to tell those closest to them because of embarrassment.

If you notice any of the warning signs, it is important not to ignore what may be occurring. Ask additional questions to clarify what is going on and if financial abuse may be happening.

If it is clear your loved one is being victimized, the only way to stop it may be to report it to your local authorities. I realize this may be a heart-wrenching decision if the alleged perpetrator is another family member, but sometimes you need to make difficult choices for the sake of protecting your honored elders.