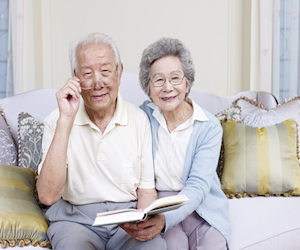 Americans have a lot of interesting cultural quirks regarding the elderly; not the least of which is a tendency to write and think about ‘the elderly’ as if there is a single monolithic group of senior citizens that all face the same problems and require the same solutions. The truth is, of course, much more complex; our honored elders are just as diverse today as they were in their youth, and they suffer from the same kinds of marginalization and prejudice that others do. Here is a deeper look at how characteristics other than age can affect the lives of our elders.

For a variety of reasons both biological and social, women tend to outlive men. This fact makes them more likely to live alone, in poverty, and without proper care. This, however, is nearly irrelevant compared to the real burden that seniority bestows upon women; the removal of their sexuality as a component of both their influence and their value.
I cannot speak to how that loss feels, but I can tell you a true story about a woman who chose to die rather than get old. She had kidney problems, but after her 50th birthday, she simply refused dialysis on the grounds that she did not want to be “poor, ugly, and old.” I can also tell you that, Golden Girls and Grumpy Old Men aside, media portrayals of senior women (and of the aging process for senior women) are vastly more derogatory than they are of senior men.
Clearly, there is enormous weight behind the notion that women lose more than men as they age; and this is compounded if and when their mates pass away and they end up alone, which happens to the vast majority of them. The result is nursing homes are populated with between 7 and 10 women for every one man, yet this is the gender far more likely to be seen in a negative light.

One of the most striking statistics from a brief examination of the issue of race in elder care; racial (and/or ethnic) minorities enter the nursing home system an average of thirteen years earlier than white seniors. They also tend to enter with much more dramatic health issues than whites. The main reason for the disparity is non-white elders (and their families) tend to have lower income levels than their white counterparts; as such, they tend to have fewer affordable senior care options.
For minorities who end up in a nursing home, the discrimination they face is grim. According to a study by Medicare, staffing levels in majority-white nursing homes are 34% higher than those in majority-black homes, and 60% higher than those in majority-Latino nursing homes. And those numbers are already adjusted to take non-race variables such as income levels, health care needs, and location of the nursing homes into account.

Classism, the treatment of wealthy folks differently from poor folks, is an issue in virtually every area of American society. The same holds true when it comes to elder care; as mentioned earlier, those with means have more healthcare options and tend to receive better care overall. For many, this means avoiding nursing homes altogether and hiring private caregivers to provide in-home treatment.

Of the seniors that do receive nursing home care, 63% have their bills paid for by Medicaid or the state, 14% by Medicare, and 23% pay the nursing home privately. Those who can afford to privately finance their senior care shop around for better quality nursing homes or assisted living centers. By contrast, those whose care is financed by the government are limited to the facilities that will accept Medicaid and Medicare patients.

The upshot of all this is simple; it is important to remember that our aging loved ones are not a homogenous group that all share the same problems, have access to the same treatment options, and experience the same results. Getting old does not mean you stop being Latino, female, or rich. All of these factors make a difference in the quality of life seniors enjoy during their golden years, and as such, they should all be taken into account when addressing senior care issues.