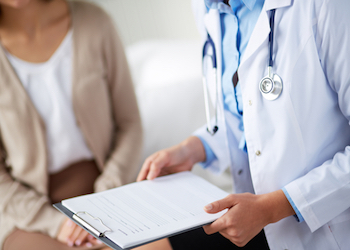 A few weeks ago, I accompanied my elderly friend Miriam to the hospital. She called me complaining of severe dizziness, nausea and feeling very unsteady. After considering all of her options, she decided to call an ambulance, a decision I supported.

I was at her house when the paramedics arrived. They did a nice job I thought of gleaning information from both of us. Miriam was hyperventilating, anxious, pale, wobbly, but lucid.

I followed the ambulance to the hospital. About 15 minutes later, I was escorted back to her room in the ER. Pathetically Miriam raised her hand to acknowledge me. The ER nurse was explaining how she was going to start an IV, when Miriam added that she didn’t have her hearing aids in and to “Please speak up a bit.”

From that moment forward the nurse, Theresa never wavered from maintaining deaf-friendly communication. She established eye contact and/or touched Miriam’s arm before speaking and confirmed Miriam had heard her.

The ER doc, not so much!

But when the ER doc came in everything unraveled! From my strategically placed chair, the vantage point was perfect. The ER doc was optimally communication challenged.

I know my retirement age biases show, but if he was 30, I’d be surprised. Still, I’m only judging him on his very poor and did-not-get-better interview.

His 1st mistake, which by the way is a pet peeve of mine, was introducing himself while still walking into the room. Good thing he had on a legible ID badge. I took notes on the spelling of his name.

Happy Communication mistake #2, also #2 on my interaction annoyance list, was looking and talking to me and not Miriam as he asked “So what brings you into the Emergency Room today?”

I curtailed what would have been a very sarcastic comeback and just pointed to Miriam as I broke off eye contact with him. I did volunteer some specific details so that Miriam didn’t have to struggle to process what the Doc was mumbling.

The ER doc popped in and out several more times over the next 4 hours. Miriam pretty much gave up on trying to get him to talk to her, in part because she felt so awful.

I could tell from some of his questions that he assumed Miriam’s usual skills and mobility abilities were more handicapped than was the case. In an effort to glean a clear baseline of her pre-emergency room status, he asked:

Does she use a walker? Cane? Who helps her on a daily basis?

I replied. “She lives alone. Is completely independent and drove herself to the grocery store yesterday! So her current dizziness etc. is not normal.”

Mimicking the cell phone ad, I wanted to say, “Can you hear me now?”

But my information finally painted the right picture. Whatever was causing “what brought her into the ER”, it wasn’t typical for her.

The medical assessments, tests that he ordered, decision to admit her and diagnosis of her condition as likely “significant viral infection with dehydration,” was probably accurate.

Her cheeks pinked up with the IV fluids and anti-nausea meds and she was discharged the next day to home.

I’m not complaining about his medical knowledge. This post is about poor communication skills and assumptions!

I completely recognize the difficulty of assessing patients in an ER setting. It’s called an Emergency Room for a reason. That said however the paramedics who brought Miriam in reported her to be “alert and oriented times 3”; translation: conscious and lucid. The ER doc could have and should have talked to her more and me less.

A week later Miriam called me for my opinions as she was filling out a survey regarding her ER visit. We discussed the doc’s dialogue disasters but as her recollection was foggy, she declined to address that in her responses. And so Doc Mumble’s questions will continue to fall on others’ “deaf ears.”