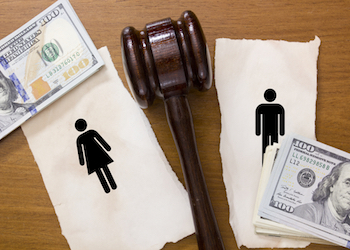 I’ve have the honor of working with a University of Pennsylvania graduate student. She’s been doing my marketing and has created a powerful social media appearance for her favorite divorce coach! She found herself during one of her internships at the county courthouse. She made her way to divorce court and began texting me, aghast at what she saw! She blogged her experience to share her new knowledge with others. It’s an eye opener!

Would your family be willing to spend upwards of $5,000 for a day in court arguing without a decision being made? Of course not! But what many people don’t realize is this is just what you may be doing when you go to court unprepared in a divorce.

I had the privilege of visiting a local courthouse recently, the morning in criminal court and the afternoon in divorce court. A couple with two teens had been in family court for most of the day arguing over student loan debt, tuition, houses, assets, and children’s expenses, to name a few. While all that time was spent arguing, I was shocked when the parties left the courthouse without any final decisions, without a clear direction on how to move forward and most likely spent $5,000 in legal fees.

How does this make sense? A child was asked to testify against his mother about her abilities as a parent. A teen was asked to align himself publicly with one parent. They were arguing over college loan debt yet were spending thousands to fight about how to pay it. This money could have paid down one of the loans. Who paid the price? In my opinion, it was the children. The money earmarked for college was now being used for legal fees in their parents’ divorce.

But what could they have done differently? Is that how divorce works? Should it be that insane? Arguing and spending money to discuss issues doesn’t really make sense to me. Since I’ve spent time with Sheila Brennan, Divorce Coach, I know that having a divorce coach on your team could have saved this couple from the insanity of fighting in court about debt. Couldn’t a mediator have been a better solution to this situation and others like it?

The couple I witnessed in court got caught up in the train wreck nature of divorce. They were hurting themselves and the financial and emotional future of their family. Maybe they think divorce is supposed to look like this. I don’t know about you, but I would be furious if my parents spent their time fighting over how to best repay a school debt and give $$$$ to a third party – and at the same time watch my school loan debt remain static. Why pay to argue when you could do it for free at home, over emails or texts? Makes no sense to me!

Meghan Jones is a graduate of St. Joseph’s University and currently pursuing her MSW at the University of Pennsylvania. She partners with a divorce coach to increase the coach’s social media presence and to market/promote various events. Meghan doesn’t know divorce personally as her parents have been married for over 20 years. But she found herself one afternoon in divorce court as part of her internships with the courts. And wanted to share her experience with others!