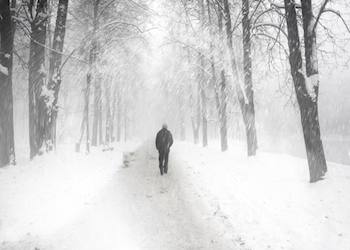 Growing old comes with a wide variety of changes in our bodies and brains, and those changes cause a number of predictable shifts in habits, traits, and concerns. One of the more unusual, from a physiological point of view, is sleep.

When it comes to the elderly and sleep, several questions often come up. Why should growing older make sleeping more difficult? What problems does that cause? And what can we do about it?

A Brief Explanation of Sleep as We Know It
Sleep is broken up into four ‘stages,’ each stage with its own unique attributes:

Changes in Sleep with Age
The science of polysomnography – the measurement of brain waves, heart rate, blood oxygen, movement patterns, and other changes that occur during sleep – has given us a lot of data in the last decade. For example, we now know that in general, people tend to sleep about 30 minutes less per decade starting at about 50 years of age.

Sleep in the elderly becomes shallower, making it easier to wake up due to minor disturbances. As a result, sleep becomes more fragmented, and sleep cycles are regularly disrupted. This means that our honored elders tend to spend much more time in Stage 1 and Stage 2 sleep, and much less time in Stage 3. Interestingly, the proportion of REM sleep to total sleep tends to remain about the same.

Problems Caused by Age-Related Sleeping Changes
All of these changes tend to cause sleepiness during the daytime, which in turn leads to more naps (even and especially unintentional naps), as well as reduced cognitive ability and poor memory formation.

More direly, the constant low-level sleep deprivation leads to increased risk of depression. In fact, some studies have shown that a few years of constant mild sleep-dep is a good predictor of a diagnosis of depression in older women.

For men and women over 70, consistently poor sleep was associated with a significant increase in dangerous falls. And for men in particular, with a decrease in physical strength and agility.

How to Solve Sleep Problems in Seniors
If your honored elder is having trouble sleeping, ask their doctor about the potential to have them assigned a Cognitive Behavioral Therapist (CBT). The National Institute of Health (NIH) has concluded that working with a CBT is at least as effective as pharmaceutical sleep aids but without the side effects. In addition, the benefits of working with a CBT continue long after the therapy sessions end.

If your loved one is in a nursing home, assisted living center, or any other type of institutional environment, talk to the staff there about light. One of the primary causes of insomnia in the institutionalized elderly is a circadian rhythm disruption caused by bright lights that stay on at all times and/or a lack of exposure to natural sunlight. Make sure the lights in their room are turned down in the evening and off at night, and that they get at least 60 minutes of exposure to natural sunlight each day.