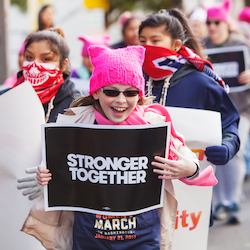 I’m going.
I’m bringing my young daughter.
There’s a morning train heading to Penn Station that day; she and I will be on it.

It’s a sad testament that I feel the need to write this paragraph, but my daughter and I will hang towards the rear of the rally area, and stay on the back end of the march, as I want to constantly assess for safety.
But every indication, every intent, every effort made in the planning of this march, points towards the safety and empowerment of the people, with its foundation in love.

My behavior was never overt (I’ve never grabbed anything)…it has been much more subtle. So yes, I have been a misogynist in personal thought and deed. But over the past few years, I’ve striven to rid myself of this toxicity by being more mindful and empathic to the suffering of the female spirit, that has been the result of this collectively gross insult.

I’ve come to understand that my misogyny was partly fostered within my familial setting. But it was more so a product of the systemic entrenchment of a world dominated by masculine aspects of toxicity. This speaks to my favorite phrase: “When you’re accustomed to privilege, equality feels like oppression”. So from that perspective, I wonder if it isn’t possible to say that all men are misogynists, unwittingly or not, simply by by our existence (i.e. our privilege) as men, in this world dominated by masculine aspects of toxicity? This isn’t a concept original to me, but I believe it’s worth personal exploration by all men, such that future generations of women are not subject to it. Ultimately, it’s my hope that my daughter grows into an adult that finds #MeToo foreign and archaic.

Masculine aspects of toxicity are not the exclusive domain of men; just look to Kellyanne Conway, Fox News female anchors, and some philosophies and ideologies of Ayn Rand, to name a few. But too many men fully embrace this, legitimize and normalize female disenfranchisement, so as to suppress their male insecurities and keep it in the dark recesses of their unconscious.

An emotionally secure and conscious human doesn’t disenfranchise others, doesn’t objectify, belittle or bully others.

Rather, an emotionally secure and conscious human embraces empowerment of others, equality, intimacy, vulnerability and decency. I’m hopeful that all those qualities will be in full display during the Women’s March, NYC, Saturday, January 20, 2018

I’m going.
I’m bringing my young daughter.
There’s a morning train heading to Penn Station that day; she and I will be on it.
I’m wondering who else I might see on that train.

Submitted by guest contributor, Ernesto Ponce, LMSW. Ernesto had been working for 25+ years in the industrial manufacturing world as an engineer, but is now passionately engaged in the mental health field on Long Island as a Psychotherapist.