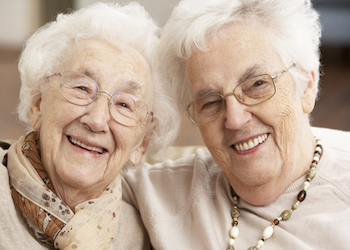 I was giving a presentation on dementia and friendship last spring at one of the assisted living facilities in Charlottesville, where I live. A few attendants had set out dinner for the audience. Among this group, quietly eating turkey, was a woman and her father, who has advanced Alzheimer’s. He was attentive in the way he could be. He clapped loudly when everyone else clapped; he laughed loudly when everyone else laughed. A few times, she reached up and gently restrained his hands or patted him on the back.

You could see she had lost the father she knew growing up. The roles had reversed. She was the caretaker and protector, helping him figure out how to fit into a situation he did not comprehend, like a patient parent cajoling a child through church.

During the discussion after I wrapped up my talk, she commented that her father was different now but in some good ways, even amid the staggering losses to his intellect. He’s more gentle, she said, and happy to be with her. He compliments her.

Not all people in mid-to-late stage Alzheimer’s are cooperative and grateful. Many are quite the opposite, and family caregivers struggle around the clock with a constellation of problems that are hard to manage: incontinence, wandering, loss of inhibition, resistance, paranoia, topsy-turvy eating and sleeping habits—too many to list.

This is where friendship is invaluable, both to the person with Alzheimer’s and to the caregiver. Friends can come and go at will. They aren’t tired and frustrated in the same way. Friendship with a person suffering from dementia, unlike caregiving, isn’t fraught with responsibility. It doesn’t involve constant second-guessing to get through activities that used to happen automatically: How do I get Mom in the bath? How do I comb the tangles out of her hair without upsetting her? Should I make the dental appointment, and will we be able to be there by ten in the morning?

This image of a woman with tangled hair, maybe swatting at the hands trying to comb it, or trying to wash her face or brush her teeth is a hard one for a friend, who might be tempted to ask—but probably never admit to asking—What about me? Why do I keep up a friendship with someone who no longer recognizes me, who will not remember two minutes after I leave that I visited?

These are not bad, self-serving questions. They’re normal for people pulled in a million different directions, trying to keep track of jobs and families in a fast-paced culture in which every minute seems to count.

But I think of Henri Nouwen, a theologian and writer who taught at Harvard and Yale while managing to publish some 40 books. Nouwen spent the end of his life caring, by choice, for a profoundly handicapped man. He wrote about the experience in his last book, Adam: God’s Beloved. In this book, Nouwen describes Adam’s limitations: he cannot speak, he cannot walk, he cannot attend to a single one of his needs. Nouwen pits these, however, against his own less obvious limitations: his incessant busyness, his Westernized frustrations, his loneliness, his fear of not measuring up. In a weird way, Adam becomes to him the representation of all that is truly meaningful and godlike in life. Adam was his opportunity to experience a pure kind of love.

Realistically, friendship has limits, though. We aren’t able to drop everything and free up long stretches of time. Few of us have Nouwen’s capacity for sacrificial giving, or the means for it. But my point is that Nouwen saw himself as the beneficiary of Adam’s friendship and guidance, not the reverse.

When we ask ourselves that question, What’s in it for me? (and I’m as guilty of the question as the next, despite my own engulfing experiences with caregiving) let me suggest, as much to myself as anyone else, these answers:

This article was written by Mary Cail, Phd and was originally published on MariaShriver.com