Home / Divorce / The Shame and Blame Cycle of Divorce 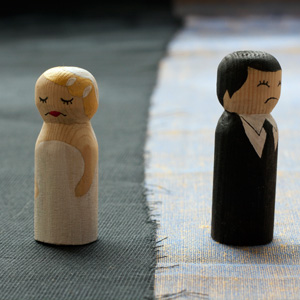 by Tara Eisenhard~When I announced my divorce, I was surprised to receive sympathetic and/or angry reactions from many people in my life.  People who knew very little about my situation suddenly morphed into uninvited legal counsel.  They bombarded me with advice about how to win the battle or punish my ex, neither of which was my goal.

I was deeply confused, until I took a closer look at the world we live in. Our culture prizes family and despises divorce.  When divorce is discussed, it’s usually addressed with phrases such as “failed marriage” and “broken home.”  Who, in his or her right mind, would want to describe their life in those terms?

As a result of our societal views, people who go through a divorce often develop a deep sense of shame.  Although they may have spent many years attempting to save the marriage, they are confronted with the guilt of “taking the easy way out.”  They believe they’re doing a bad thing.  They stress about being bad parents.  They fear they are bad people.

Adding shame to the mix of grief, confusion, anxiety and other emotions of divorce makes for a volatile concoction, which leads to a state of desperation.  What could be worse than your world spinning out of control and feeling as if you are personally at fault?

In a frantic attempt to regain stability, individuals in the whirlwind of divorce will often find comfort in anger.  At this stage of the game, while the wounds are fresh, anger masquerades as power.  A quick list of the wrongdoings of the ex will justify all rage, and suddenly the once-flailing person is renewed with a sense of purpose.

The finger-pointing begins and the shouting follows.  Common ground crumbles as legal fees climb.  It’s a dance of self-preservation, really.   Unfortunately, neither side can see the truth because they’re too focused on punishing each other.  They don’t understand they’re actually trying to reclaim their own dignity.   The war of divorce is a delusion born of desperation.

Shame ignites blame.  Blame sends shame to the other side.  The vicious cycle feeds itself at the expense of anyone who participates.

After I learned about the shame and blame cycle, I was able to understand how my well-meaning friends and family were trying to protect me from shame.  By taking my side and blaming my ex, they assumed they were helping me to stay strong and empowered.  They’d learned this through years of traditional divorce conditioning, and it was all they knew.

Fortunately for me, I’d grown up with a different model.  Personal experience had taught me that divorce is a solution and not a problem.  I didn’t feel guilty because I knew my ex and I were doing the right thing.  I had no desire to hate him because we viewed each other as partners in our divorce.  In short:  I’d escaped through the Shame Loophole.

How can others stop the cycle of shame and blame in divorce?  Shame starts to dissolve when you find a safe place to be honest about your doubts and fears.  The cycle breaks down when you decide to accept the circumstances and embrace the change.  Blame disappears when you and your ex can find common ground and use it to build a different kind of relationship.

We live in a culture that prizes family and despises divorce, but the two are not mutually exclusive.  A good divorce is better than a bad marriage, and families have the ability to evolve instead of dissolve through the separation process.  There is a better path, and you can walk it.

END_OF_DOCUMENT_TOKEN_TO_BE_REPLACED

2 thoughts on “The Shame and Blame Cycle of Divorce”