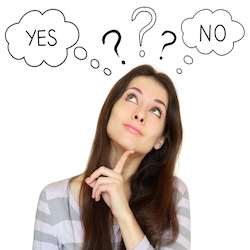 We make decisions everyday –some about our relationship, some at work, some just to guide ourselves, like “What diet should I follow?”

Some of these decisions are easier to make than others, but their common denominator is that when you feel pressured to decide, your own experiences will tell you that more than frequently you make the wrong choice.

You’ll make better decisions under pressure if you let your “natural tools” –face, voice, behavior and feelings – help you:

1. Watch Your Facial Expressions. When you have an important decision to make, stand in front of a mirror and think of the decision you are to make. Does your face show happiness, confidence, enthusiasm or anxiety and fear? If the latter, you better think twice.

I had a client who was about to become engaged. She said it was right for her but when she waw how she looked in a mirror when she was discussing her relationship, she opted out and soon came to realize she would have been making a huge mistake. Her facial expressions helped her realize that she was fooling herself. Later on, she told me that deep down she felt something was wrong but tried to convince herself otherwise because she didn’t want to hurt her boyfriend. The mirror on the wall helped her become the fairest of them all.

2. Listen to Your Voice. Sound carries emotion, which is why some sounds of music make you enthusiastic, others scared, others depressed.

Talk about a decision into a tape recorder or out loud and ask yourself, “How do I sound?” Doing so often brings forth the incongruence between what a person says and what is really going on. Sounds of silence, or when the person cannot talk about their decision enthusiastically, often indicates one is not listening to one’s instincts/intuitions.

3. Actions Speak Louder Than Words. Our thoughts often “lie” to us, but our behavior speaks the truth. One client told me that for weeks he was confident and enthusiastic about going into business with his friend, but when I pointed out his behavioral avoidance to legally cementing the deal, he confessed that he felt he was kidding himself. Observe your behavior, and if it doesn’t match what you say or feel, think about why, and you will get closer to deciding what is the best action for you to take.

4. Visualize & Feel The Outcome of Your Decision. When we are anxious (uncertain) about a decision we can help ourselves by visualizing and feeling the outcome if we were to decide one way or another.

Ask yourself, “How will I feel in a year if go down this path? Answers of joy, engagement, interest are tell you it is a path to take, and that you are in tune with your nature. If the answers are different, your bad feelings are saying, “This isn’t for you. Don’t do it.”

Not long ago, I was giving a presentation to the 200 most successful women in a major financial institution. Shortly after my presentation, and while I was waiting to be driven to the airport, one of the participants approached and asked if she could have a few minutes of my time. “Go ahead,” I told her.

She told me that she worked in Florida and had been offered a new position in the firm with great opportunities in Los Angeles. It was everything she wanted, but for some reason she felt uncomfortable about taking it. She explained that she had lived in Florida for 5 years and had moved there from New York because she wanted to be closer to her parents who lived in a retirement community in Miami. She saw them frequently. She said she had to make her decision in a week and didn’t know what to do.

I gave her the following instructions. “ For the next week, several times a day, imagine yourself living in LA. It is six months from now. How do you think you will feel about not seeing your parents frequently? How will you feel about not seeing your friends? Does it make you feel good to think of yourself in Los Angeles? Does the type of work you’re doing excite you much more than your current work?”

A week later, she sent me an email: “I’ve decided …when I think about how I will feel if I took this job and moved so far away, I realize that it would not make me happy. What does make me happy is being close to my parents, my good friends, and the truth is, I like my work a lot but these other things are more important to me. I think I was feeling the pressure to take a move-up position, but it wasn’t making me comfortable; that is the nagging feeling I was having. It was telling me something was wrong. Now, I feel good about my decision,” she wrote.”

Next time you have to decide under pressure, listen to your natural tools, not others!

The author of this article is  Hank Weisinger and was originally published at MariaShriver.com