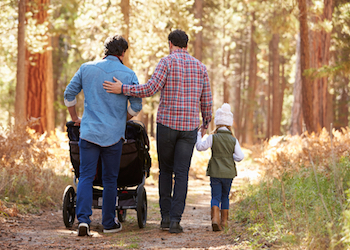 Last month, the New York State Court of Appeals, New York’s highest court, ruled that a de facto parent who is not a biological or adoptive parent has standing to petition for custody and visitation. This comes up in the context of same-sex relationships where one parent is related to the child biologically, where the parents have raised the children together but are not married.

The issue is whether, if they break up, the non-biological parent may ask to the courts to consider whether continued contact is in the best interests of the child. In other words, this begs the question of whether the parent/child relationship can be considered more by relationship than by biology or a court decree.

This ruling reverses the archaic 1991 precedent of Alison D. v. Virginia M., which held that non-biological, non-adoptive parents were considered to be “legal strangers” to the children they raised. Thus, they did not even have a foot in the door to seek continued contact with their children. This harmed children by denying them the love and affection and nurturance of the adults who raised them. At long last, the Court of Appeals has overturned this “needlessly narrow” ruling.

This is a big deal. It is a meaningful step towards understanding that parenting is a relationship, not just a biological act. It’s an overdue recognition of the way our society has evolved over the last several decades. In New York, same sex couples received the legal permission to adopt in 1995, and the right to marry in 2011. Until now, people could spend years caring for children without any legal standing in New York.

This current case began when Brooke S.B., sought visiting rights and child support for the child she and her former partner, Elizabeth A. C.C., had planned for and raised together. Although Elizabeth bore their son, the couple shared parenting responsibility. Their child took Brooke’s last name and called her “Mama B.” Brooke fed him, clothed him, and loved him. In all of the prescient ways, she was and is his mom.

Brooke and Elizabeth were engaged to marry, but broke up in 2010, before New York’s marriage equality law passed in 2011. In the midst of their difficult separation, Elizabeth denied Brooke contact with their son. Brooke tried to take Elizabeth to court, but because of the 1991 precedent, she had no legal standing as their child’s parent. Her case was dismissed before a decision could be made on the merits.

In overturning the decision 6-0, the Court argued that the primary principle of New York family law is to protect a child’s best interest. The earlier antiquated notion of what characterizes a family had hurt children and “inflicted disproportionate hardship on the growing number of nontraditional families.”

The new rule means a parent in an unmarried couple can seek parental rights if they can establish that both partners agreed to conceive and raise a child together, like Brooke and Elizabeth did. (Although this is a narrow ruling, the court left open the possibility that they could seek the same rights even if one parent raised the child but did not participate in the decision to have the baby. This could be important to step parents in the future, as well.)

This decision is long overdue and unquestionably important. It gives children a chance to continue the loving bond with both of the people who loved them and raised them even after the adults have separated. It brings New York up to date with several other states, and it puts the children’s interest first. It is a significant step forward for non-traditional families in the continuous struggle for equal rights.

Joy S. Rosenthal, Esq. is an experienced, caring New York City-based Family and Divorce Professional Mediator and Attorney. Joy founded Rosenthal Law & Mediation in 2006 to use both law and mediation as a tool to help families as they move through transitions. Her services include Divorce Mediation and Elder (adult sibling) Mediation, Adoptions, Collaborative Divorce, and representation in custody and visitation disputes. She also offers wills and estate planning. Visit Joy at www.joyrosenthal.com.